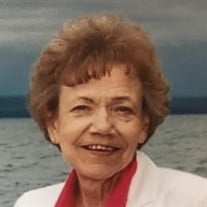 Sharon E. Kangas, 76, of L’Anse passed away at her home on Tuesday, November 7, 2017. She was born in L’Anse, MI on September 4, 1941 the daughter of the late Walfred and Selma (Haara) Haanpaa. Sharon graduated from L’Anse High School in 1959. She married Robert “Bob” Kangas on August 29, 1959 in L’Anse. He preceded her in death on September 25, 2003. Sharon was a member of United Lutheran Church, L’Anse, MI. She had worked at Snyder Drug and American Greeting Card Company in L’Anse until her retirement. Sharon was a loving mother, grandmother and great grandmother. She lived her life helping her children and grandchildren any way she could. Sharon was an avid watcher of the Young and the Restless, murder mystery shows and loved working on puzzles.. She had a passion for shopping and spending her days with her grandchildren. Sharon is survived by her daughter Janet (Frank) Supanich of Tapiola, son David (Connie) Kangas of Negaunee, granddaughters Casey (Pete) Skoglund of L’Anse, Kristen (Noah) Beesley of Pelkie and Shae Kangas of Marquette, grandson Brandon Kangas of Ishpeming, great grandchildren Molly and Madelyn Skoglund, Jayden, Kaylynn, Maci, London and Nash, sister Judy (Rueben) Bessonen of Pensacola, Florida and brother-in--law Melvin Kangas of Tapiola. Numerous nieces and nephews also survive. She was preceded in death by her parents, her husband and her granddaughter Holly Sullivan. A memorial funeral service for Sharon was held at 12 p.m. Tuesday, November 14, 2017 at the Reid Funeral Service and Chapel, L’Anse with Pastor John Ansell officiating. The family greeted friends at the funeral chapel on Tuesday from 11 a.m. until the time of the service. Interment will take place in the L’Anse Evergreen Cemetery. The Reid Funeral Service and Chapel, L'Anse is in charge of the funeral arrangements.

The family of Sharon E. Kangas created this Life Tributes page to make it easy to share your memories.

Send flowers to the Kangas family.