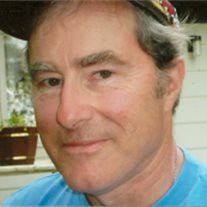 THOMAS WILLIAM "TOM" MACKE, 58, of Baraga, passed away suddenly at his home on Tuesday, August 19, 2008. He was born in Beardstown, IL. on December 12, 1949 the son of Gene and Joan (Meyer) Macke. Tom graduated from L'Anse High School in 1968. He worked as a machine operator at Pettibone Corporation, Baraga, and was a bartender at the Baraga Lakeside Inn. Tom also worked as a free lance photographer for many years, doing portraits, weddings and anniversaries. His greatest passion was riding his Honda Goldwing motorcycle. Tom took numerous trips including 8 to Sturgis, South Dakota. Tom is survived by his loving family, children, Steve (Kim) Macke of Houghton, daughter, Tracey Edmonds of Clarksville, TN, his father, Gene, his mother, Joan Ross of Baraga, grandchildren, Zoey LaPine and Tori Edmonds, step-brothers, David Ross and Joe Jr. Ross, and step-sisters, Shirley Ross, Nancy Ross, and Janet Ross, and his special friend, Betty Nilson. He was preceded in death by his grandparents, and his father, Joe Ross Sr. Memorial services for Tom were held at 10 a.m. Saturday, August 23, 2008 at the Reid Funeral Service and Chapel, L'Anse with Father George Maki officiating. The family greeted friends at the funeral chapel on Saturday from 9 a.m. until the time of the service. Following the service, the family invited friends to join them for fellowship and a luncheon at the Baraga American Legion Post 444.

The family of THOMAS W. "TOM" MACKE created this Life Tributes page to make it easy to share your memories.