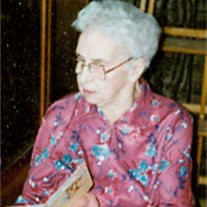 TYYNE E. MURTOMAKI, 90, of Pelkie, MI. passed away Saturday, August 5, 2006 at Maple Manor Nursing Home, Ontonagon, MI. following a period of ill health. She was born in Herman, MI. on September 16, 1915 daughter of the late Matt and Sophia (Repola) Haapala. Tyyne attended school in Herman. She married John Murtomaki on June 28, 1941 in Laurium, MI. He preceded her in death in 1968. She was an active member of Alston Apostolic Church. Tyyne enjoyed cooking and baking. Mrs. Murtomaki is survived by her loving children, John (Verna) Murtomaki of Medina, TX., Leonard Murtomaki of Nisula, Stanley Murtomaki of Calumet and Jeanette Murtomaki of Pelkie, 3 grandchildren and 3 great-grandchildren. She was preceded in death by 5 brothers, and 4 sisters. Funeral services for Mrs. Murtomaki were held at 11 a.m. Wednesday, August 9, 2006 at the Reid Funeral Service and Chapel, L’Anse with Reverend Elmer R. Liimatta officiating. The family received friends on Tuesday, August 8, 2006 from 6 until 8 p.m. at the Reid Funeral Service and Chapel, L’Anse and 1 hour prior to the services on Wednesday. Following the service, the family invited friends to join them for fellowship and luncheon in the Harrington Gathering room, located at the funeral home. Committal services were held at 2 p.m. in the Nisula Cemetery. The family has entrusted the Reid Funeral Service and Chapel, L’Anse with arrangements

The family of TYYNE E. MURTOMAKI created this Life Tributes page to make it easy to share your memories.