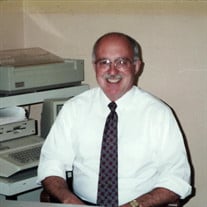 Thomas L. “Tom” DesRochers, age 82, of Pelkie, MI passed away Friday, April 3, 2020 at Baraga County Memorial Hospital, L’Anse. Tom was born in Hancock, Michigan on the 29th of September 1937 to Lawrence and Dorothy DesRochers. When Tom was four the family moved to a dairy farm in the Arnheim area where he was raised. It was on the farm that Tom developed his lifelong love of animals, gardening and all things farming. Tom graduated from Baraga High School in 1955, Northern Michigan University in 1961 and 1966. Tom’s first degree was a Bachelor of Science in Secondary Education and the Master’s Degree was in Guidance and Counseling. Tom was first employed as a teacher and counselor at Lake Linden Hubbell High School from 1961 to 1967. Tom began employment with the L’Anse Area Schools as a counselor and teacher, retiring in the spring of 1994. Tom will be remembered as a dedicated teacher and counselor earning the love and respect of many students along the way. Tom was an avid gardener both flower and vegetable throughout his lifetime. He maintained two small greenhouses and grew most of his plants from seed. In later years he took up canning too. One of his greatest joys was sharing his flowers and produce with friends and relatives. He always said it was a giveaway garden. Tom also loved to share his gardening knowledge with those who asked. Tom kept a small backyard flock of chickens for almost forty years and at one time bred exhibition Jersey Giants shipping hatching eggs and adult birds throughout the United States. For the last ten years or so Tom also raised American Singer canaries. Some were sold but many were kept for the beautiful song of the males. Survivors include sisters Judy Koski and her daughter Leann (Jim) Ellenich and their children, Elizabeth and Cory; Mary (Phil) LaCourt and their son Jamie (Erin) and their son Evan; Dorothy (Jerry) LaCourt and their daughter Michelle LaCourt, son Shawn (Carmen) and their son Cedric; and their sons Joseph and Michael (Dakota Ross) LaCourt. Tom is also survived by cousins, friends, and his beloved cat Foxy. His grandparents, parents and his infant brother Joseph predeceased Tom. Spring interment and graveside services were held at 11 a.m. Friday, April 24, 2020 in the Keweenaw Bay Cemetery, Keweenaw Bay, MI. A Mass of Christian burial will be scheduled at a later date. Tom’s obituary may also be viewed and condolences sent to the family at www.reidfuneralservicechapel.com The family has entrusted the funeral arrangements with the Reid Funeral Service and Chapel, L’Anse.

The family of Thomas L. "Tom" DesRochers created this Life Tributes page to make it easy to share your memories.

Send flowers to the DesRochers family.