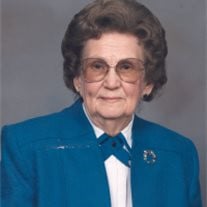 VERNA ELIZABETH TOLLEFSON, 88, of L’Anse passed away Friday, February 27, 2004 following a lengthy illness at Baraga County Memorial Hospital Skilled Nursing Unit. She was born in Baraga, MI. on August 23, 1915 daughter of the late William and Ida (Holmes) Kinnunen. Verna graduated from Baraga High School in 1933. She married John N. Tollefson on April 12, 1935 in L’Anse, MI. He preceded her in death in 1984. Verna was employed at the Baraga County Memorial Hospital as a Surgical Technician until her retirement in 1977. She was a member of United Lutheran Church, L’Anse, the Baraga County Hospital Auxiliary, Order of the Eastern Star, Eagles Aerie 2287, the Red Hatters and the L’Anse Senior Citizens. Verna enjoyed making crafts, and afghans. She was an avid card player. Mrs. Tollefson is survived by her loving daughters, Marlene (Edward) Damgaard of L’Anse, Ann (Phillip) Endres of Sand Lake, MI., 8 grandchildren, 16 great-grandchildren, 3 great-great-grandchildren, and daughter-in-law, Florence of L’Anse. In addition she is survived by nieces, nephews and cousins. She was preceded in death by her son John E., granddaughter, Sandy, 3 brothers, 1 sister, and her foster parents, Anna and Sven Hill. Funeral services for Mrs. Tollefson were held at 11:00 a.m. Monday, March 1, 2004 at Reid Funeral Service and Chapel, L’Anse with Judy Mattson officiating. Spring interment will take place in L’Anse Evergreen Cemetery. The family received friends Sunday, February 29, 2004 from 6:00 until 8:00 p.m. at the Reid Funeral Service and Chapel and one hour before the service on Monday. The Order of Eastern Star conducted services Sunday evening at 7:00 p.m. in the funeral chapel. Memorials are suggested to the United Lutheran Church, L’Anse. Envelopes were available at the funeral chapel. Following the services, friends were invited to join the family for fellowship and luncheon at the Harrington Gathering room located at the funeral chapel. Mrs. Tollefson’s obituary may be viewed at and condolences sent to www.rfsc.net. The Reid Funeral Service and Chapel, L’Anse has been entrusted with arrangements.

The family of VERNA E. TOLLEFSON created this Life Tributes page to make it easy to share your memories.