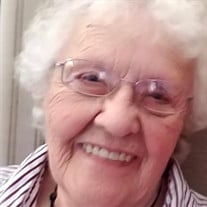 Viola “Vi” Karvakko, 90, of Baraga, passed away Sunday, September 1, 2019 at Bayside Village in L’Anse, MI, where she had been a resident for the past year. She was born in a sauna in Pelkie on March 21, 1929, the daughter of the late Antti and Aurora (Haapanpaa) Maki. Vi graduated from Baraga High School in 1947. In 1949, she married Harold Koykka in Hancock, MI, and they soon relocated to Detroit. The couple moved back to Elo and made their home in Keweenaw Bay in 1957. Harold preceded her in death in 1971. In September 1981, Vi married Paul Karvakko. Paul preceded her in death in 1999. Vi enjoyed visiting with her neighbors over coffee, doing her search-a-word puzzles, and spending time with her family. There was always an assortment of goodies for coffee, and candy for the “kids”. Vi is survived by her loving daughters, Peggy Danis of Baraga, and Bonnie (Harry Knapp) Dompier of Keweenaw Bay, and grandchildren, Scott (Amy) Tikkanen, Amy (Jim) Isaacson, and Chad (Donna) Dompier. Vi is also survived by 7 great-grandchildren, 2 great-great-grandchildren and several nieces and nephews. Vi is preceded in death by her parents, husbands Harold and Paul, two sisters, Hilma and Aggie, brothers Alec, Wilbert, Reino, Wilho “Buck”, Edwin and Rudolph, and sons-in law Richard “Chip” Dompier and Jerry Danis. A graveside funeral service was held at 4 p.m. Thursday, September 12, 2019 at the Pelkie Cemetery, Pelkie, Michigan with Pastor D.J. officiating. Following the graveside funeral service, the family invited friends to join them for fellowship and a meal. The Reid Funeral Service and Chapel, L'Anse, MI has been entrusted with the funeral arrangements.

The family of Viola M. "Vi" Karvakko created this Life Tributes page to make it easy to share your memories.

Send flowers to the Karvakko family.