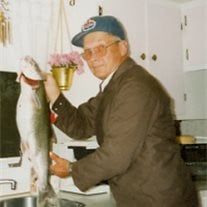 WAINO E. WUORI, 84, of Elo, MI. passed away Wednesday, February 11, 2009 at Bayside Village, L'Anse where he had been a resident for a year and a half. He was born in Elo, MI. on May 18, 1924 the son of the late Henry and Kaisa (Lantto) Wuori. Waino grew up on the family farm and graduated from John A. Doelle High School as Class President in 1943. On January 3, 1948 he married the former Grace E. Sauvola in Elo. They farmed in Elo until1965 when they moved to Orofino, Idaho. In 1967 they moved back to Elo. Waino not only farmed but he worked in construction and logged. For several years he worked at the White Pine mine and finally at the Pelkie Co-op as Feed Mill manager from which he retired in 1986. He was a member of Mission United Lutheran Church, Pelkie where he served on several committees and was an usher. He was a also a member of Otter Lake Sportsman Club, treasurer of the Elo Cemetery Association and served as sexton of the Elo Cemetery for many years. Waino was a gentle man and gentleman. He enjoyed the outdoors, fishing, hunting, and trapping. Waino had a great respect for wildlife and a special way with nature and animals. He could talk a bear down from a tree as they say. It was a pleasure for him to take his daily walks and see what nature was up to. As the old timers use to do, he'd read the stars to figure out the weather. Mr. Wuori is survived by his loving children, Lois (Alan) Kemppainen of Alston, Glen Wuori of Elo and Mark (Jean Cox) Wuori of Glendale, Arizona, grandchildren, Mindelei (Nigel Dawson) Wuori, Teri (Jason) McKean, Jennifer (Joel) Shaw, Eric (Amy) Kemppainen, Gary Kemppainen, Kristen Wuori and Eryn Wuori, great grandchildren Ellie and Rhianna McKean, Grace Shaw, McKayla and Connor Kemppainen, and brother, Sulo (Betty) Wuori of Orofino, Idaho. Numerous nieces, nephews and cousins also survive. He was preceded in death by his wife in Grace on May 27, 1996, twin brother, Arvo, and John, Walfred, Fred, Urho, William, Arthur, Armus, and Arnold, and sisters, Hilda, Taimi, Elaine, and Aileen. Funeral services for Mr. Wuori were held at 1 p.m. Tuesday, February 17, 2009 from Mission United Lutheran Church, Pelkie with Pastor John Autio officiating. Spring interment will take place in the Elo Cemetery. The family received friends at the church on Tuesday from 11 a.m. until time of the service.

The family of WAINO E. WUORI created this Life Tributes page to make it easy to share your memories.