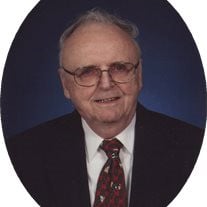 WILLIAM A. “BILL” ROLOF, 89, of Keweenaw Bay, passed away at his home Sunday, July 3, 2011, following a short illness. He was born in Ahmeek, MI. on October 11, 1921 the son of the late Albert and Rose (Schmidlin) Rolof. Bill attended school and graduated from Pequaming High School in 1940. He had been in the insurance business and since 1954 he owned and operated the Rolof Appraisers Service. Bill was a member of St. Ann’s Catholic Church, Baraga, and the church council, L’Anse Lions, Kiwanis, Knights of Columbus, Michigan Association of Realators, Michigan Association of Appraisers, National Association of Independent Appraisers, Bishop Baraga Foundation, L’Anse DDA, served on the Prison Advisory Committee and the L’Anse Village Council. On April 17, 1979 he married the former Nancy Scheunemann in Marquette. Mr. Rolof is survived by his loving wife Nancy, children Bill (Gail) Rolof of L’Anse, Ed Elliott of Harrison Twp., MI., Marcia (Louis) Mitchell of Alvin, TX, and Mary (Peter) Thielen of Marinette, 8 grandchildren, and several great grandchildren, brother Ted (Dorothy) Rolof of L’Anse, sisters Miriam Robinson of L’Anse, Rose (Joe) Bianco of L’Anse, Cecilia (Dale) Tembreull of L’Anse, and sister-in-law Anita (Richard) Stewart of Clinton, Twp., MI. Numerous nieces and nephews also survive. He was preceded in death by infant sons Gary, Barton, and Albert. A Mass of Christian burial was celebrated at 11 am, Thursday, July 7, 2011 from St. Ann’s Catholic Church, Baraga with Father Longbucco, celebrant. Interment took place in the L’Anse Evergreen Cemetery. The family received friends on Wednesday, July 6, 2011 from 6 until 8 pm at the Reid Funeral Service and Chapel, L’Anse and at the church on Thursday from 10 am until the time of the Mass. Wednesday evening a Knights of Columbus service was held at 7 p.m. followed by a parish prayer service at 8 pm.

The family of WILLIAM A. "BILL" ROLOF created this Life Tributes page to make it easy to share your memories.

Send flowers to the A. "BILL" ROLOF family.