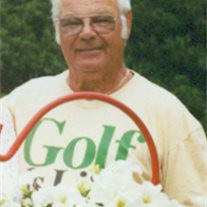 WILLIAM E. “BILL” VADNAIS, 81, of Keweenaw Bay, entered eternal life at his residence Tuesday evening February 1, 2005, under the loving care of his wife Marcella and Baraga County Home Care and Hospice. He was born in Marquette, MI. on May 8, 1923 son of the late Napoleon and Hilda (Rivard) Vadnais. Bill graduated from Marquette High School in 1941. He served in the Army Air Force from 1943 to 1946. Bill married Roberta Miesbauer on February 11, 1950. She preceded him in death on October 17, 1973. On May 31, 1975 he married the former Marcella Kunick. Bill is well known for his work with the Sooline-DSS& A as a station agent. He worked at the Baraga and L’Anse depots for 36 years, retiring in 1982. Bill was a member of St. Ann’s Catholic Church, Baraga, the Baraga American Legion Post 444, the L’Anse Knights of Columbus 3934, Msgr. A.J. Rezek Assembly, the L’Anse VFW Post 3897, charter member of the L’Anse Golf Club, and the Baraga Volunteer Ambulance Service and he served on various boards and committees in the area including the Board of Canvassers. He enjoyed his favorite sport, his love of golf, and woodworking, dancing, reading westerns, and was an avid Green Bay Packer fan. Bill is survived by Marcella his loving wife of 29 years; 5 daughters, Mary (Joe) Glasson of L’Anse, Patricia (Mike) Gauthier of Baraga, Monica (Ken) Lantzy of Carrolltown, PA., Carol (John) Sterbenz of Aura, and Jane (Chuck) Thelen of Ovid, MI., 2 sons, Glen (Marlene) Vadnais of Murphy, N.C. and Dale (Celia) Vadnais of L’Anse; 1 step daughter, Susan (Wesley) Laitila, numerous grandchildren and great grandchildren, 2 sisters, Leona Kozma and his twin, Dorothy Proulx. Special friends Raymond Brodbeck and Dan Lazzari also survive. He was preceded in death by his brother, Francis and stepson, Dale Kunick. A Mass of Christian burial was celebrated at 11:00 a.m. Saturday, February 5, 2004 from St. Ann’s Catholic Church, Baraga, with Father Chacko as Celebrant. Spring interment will take place in the Baraga Cemetery. The family received friends Friday, February 4, 2005 from 6 until 8 p.m. at the Reid Funeral Service and Chapel, L’Anse and 1 hour prior to the Mass at church on Saturday. Friday evening, Baraga County Area Veterans, under the direction of the Baraga American Legion Post 444 conducted military honors at 6:30 p.m. followed by a rosary service conducted by the Knights of Columbus at 7 p.m. The family would like to send a special thank you to the wonderful hospice care that Mr. Vadnais received from Baraga County Home Care and Hospice. The Reid Funeral Service and Chapel, L’Anse has been entrusted with arrangements.

WILLIAM E. &#8220;BILL&#8221; VADNAIS, 81, of Keweenaw Bay, entered eternal life at his residence Tuesday evening February 1, 2005, under the loving care of his wife Marcella and Baraga County Home Care and Hospice. He was born in Marquette,... View Obituary & Service Information

The family of WILLIAM "BILL" VADNAIS created this Life Tributes page to make it easy to share your memories.