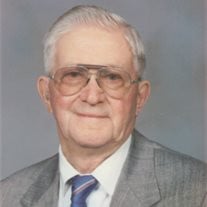 WILLIAM “BILL” PYHTILA, SR., 91, of L’Anse passed away Monday, February 14, 2005 at Covington Rest Home following a lengthy illness. He was born in Alston, MI.on July 26, 1913 son of the late Erick and Hilja (Lantto) Pyhtila. Bill attended school in Hancock, Pequaming and L’Anse. He married the former Toini Lehtinen on April 15, 1939 in Chassell, MI. She preceded him in death in 1985. Bill worked at the L’Anse Sawmill and for Ford in the Rouge Plant in Detroit until his retirement in 1953. He then worked for CCI as a drill operator and retired in 1975. He was a member of United Lutheran Church, and was a 32nd degree Mason and was a member of the Shriners. Bill was an avid hunter and had fished since he was a youngster. He loved to go to hunting camp and enjoyed telling stories with his hunting buddies. Mr. Pyhtila is survived by his loving son, William Jr. (Betty) of L’Anse; grandchildren, Matthew Pyhtila of L'Anse and Joy Ellen (Brandon) Turunen of Lawrence, KS., great-grandchildren; Payton, Carter and Lindsey. His niece Phyllis and nephew, John also survive. He was preceded in death by his sister Elsie Hokkonen. Funeral services for Mr. Pyhtila were held at 11:00 a.m. Saturday, February 19, 2005 from United Lutheran Church, L'Anse with Pastor Scott Williams officiating. Spring interment will take place in the Evergreen Cemetery. The family received friends Friday, February 18, 2005 from 6 until 8 p.m. at the Reid Funeral Service and Chapel, L’Anse and 1 hour prior to the funeral service at church on Saturday. Friday evening, the Masonic Lodge 547 F & A.M. conducted a memorial service at 7 p.m. in the funeral chapel. The family suggests memorials in Mr. Pyhtila’s name to be directed to United Lutheran Church Endowment Fund. Envelopes were available at the funeral home. The Reid Funeral Service and Chapel, L’Anse has been entrusted with arrangements.

The family of WILLIAM E. "BILL" PYHTILA created this Life Tributes page to make it easy to share your memories.