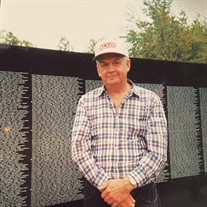 Wesley J. “Wes” Laitila age 77 of Keweenaw Bay, MI passed away April 11, 2021 at his home with his loving family by his side, following a short illness with cancer. He was born on the Askel Hill on July 22, 1943, the son of the late Ed and Mae (Heikkinen) Laitila. Wes attended the Doelle School in Tapiola and left after the ninth grade to seek employment. Wes served in the United States Army during the Vietnam War and was honorably discharged following 2 years of service. He married the former Susan “Sue” Weideman in Elo, MI on July 12, 1969. The two of them met on a blind date, were married shortly thereafter and had been married for 51 years. Wes was employed at the former Celotex Corporation for 40 years, retiring on January 11, 2008. Following his retirement, Wes spent a good portion of his time helping his daughters with projects and anything needing repair. They were the light of his life and he was there for them always. His love for animals in the wild, and tame, was evident in his daily assistance in caring for both of his daughter’s multiple pets every day. He kept busy with the little jobs he needed to do for them daily, and enjoyed being helpful to them all. Wes was a member of Chassell VFW Post #6507. He was known for having a bit of a “wild streak” and full of shenanigans in his earlier years, but deep down was a kind and gentle soul that was always willing to help anyone out, and touched the hearts of so many. He was known for his hunting and fishing abilities, and taught others his skillful techniques. Wes was well known for making some of the best smoked fish and venison in the area. He also enjoyed hunting and fishing, planting his vegetable garden and berries every summer, working out in the yard every day, feeding the wildlife in his yard, and spending time and having lots of laughter with his family. He was a loyal fan of the Detroit Lions, Redwings and Tigers, and also had a deep passion for music. Wes is survived by his loving wife Sue of Keweenaw Bay, daughters Angel Wadaga (fiancé Jim Bianco) of Baraga, and Sarah Laitila of Keweenaw Bay sisters Shirley Schuman of Brighton, MI and Lori (Jim) Stingle of Tapiola, brothers, Edsel Laitila of Elo, David Laitila (Diana Pirkola) of L’Anse and Roger Laitila of Askel, sisters-in-law Joan Laitila and Peggy Laitila both of Keweenaw Bay, and numerous nieces and nephews and cousins including his special cousin Raymond “Tuffy” (Kathy) Laitila of Elo. He is also survived by grandchildren in his heart; Isaac, Genevieve, and Rachel Bianco and Savannah Stepan and his sweet little dog Lucy, that he adored. The two of them were inseparable. He was preceded in death by his parents, brothers Bob, Howard, Donnie and infant brother Roland, his sister Joyce and his very special son-in-law Brian Wadaga. Funeral services for Wes will be held at 3 p.m. on Saturday, April 17, 2021 at the Reid Funeral Service and Chapel, L’Anse with Pastor John Ansell officiating. The family will greet friends at the funeral home on Saturday from 1 p.m. until the time of the funeral service. Chassell VFW Post #6507 will conduct military honors at 2:30 p.m. Interment will take place in the Keweenaw Bay Cemetery. Wesley’s obituary may also be viewed and condolences sent to the family at www.reidfuneralservicehapel.com The Reid Funeral Service and Chapel, L’Anse has been entrusted with the funeral arrangements.

The family of Wesley J. "Wes" Laitila created this Life Tributes page to make it easy to share your memories.

Send flowers to the Laitila family.