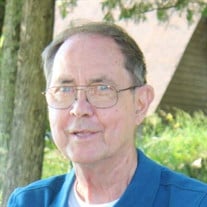 “Bill” William T. Koski, age 80, of L’Anse, passed away Tuesday, June 21, 2016 at UP Health System, Marquette. He was born in Herman, MI on July 15, 1935 the son of the late Eino and Sadie (Keranen/Falk) Koski. Bill graduated from L’Anse High School in 1953 and remained a lifetime area resident. He had worked for the former Celotex Corporation as a foreman until his retirement in 1988. Bill was an avid sports fan and enjoyed watching the Detroit Tigers, the Red Wings, Lions and Michigan Wolverines. He liked playing cards, including cribbage and pinochle, gardening and working crossword puzzles. Bill loved spending time with “the girls”, family and friends. Bill is survived by his daughters, Julie (Terry) Kuklinski of Sheboygan, WI and Susie (Tom) Ziebell of Skanee, grandchildren Tony (Jamie) Talerico of Merrill, WI and Dan Gipp of Merrill, WI, great grandchildren Fletcher and Makayla Talerico, brothers Donald (Cathy) Koski of Battle Creek, MI and George Falk of Monterey, CA, sisters Evelyn Corgan of Skanee, MI, Irene (John) Fisher of Escanaba, MI and Darlene (Robert) Fredrickson of Goudy, MI. He was preceded in death by his brother John Koski, step-dad George Falk and brother-in-law John Corgan Funeral services for Bill were held on Saturday, July 2, 2016 at the Reid Funeral Service and Chapel, L’Anse with Pastor Peter Suomela officiating. The family greeted friends on Saturday starting at 10:00 a.m. with the memorial service scheduled at 11:00 a.m. Immediately following the service the family invited friends to join them for a luncheon and fellowship in the Harrington Gathering Room, located at the funeral home Interment took place in the Skanee Cemetery. A Memorial will be made by the family to the Mayo Clinic for rheumatoid arthritis research in Bill’s honor. Contributions may be directed to the family.

The family of William T. "Bill" Koski created this Life Tributes page to make it easy to share your memories.

Send flowers to the Koski family.