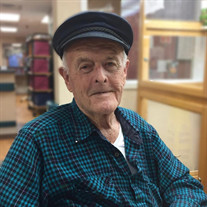 William Joseph "Bill" Matt was born in Colwood, Michigan on April 2, 1928 and passed away peacefully at the age of 92 at Bayside Village in L'Anse, Michigan on December 31, 2020. Bill was a lifetime farmer and owned and operated his centennial family farm from the age of 15 until he was 85. Over seven decades he grew primarily sugar beets, but also grew soy beans and clover. He was known far and wide as the gentleman farmer. He was a loyal, kind friend to anyone he met and he loved his family and friends dearly. Bill's easy going nature and calming spirit will be truly missed. Bill loved farming and could answer any question about growing anything and was a loyal John Deere man owning many tractors including antique models. He was a skilled wood worker and loved building tables, shelves, turntables and anything his family could dream up. He was proud of his German heritage and was a lifelong member of the St. Agatha Catholic Church in Gagetown, Michigan. In his retirement years, Bill became a pro at bingo and loved watching westerns, especially Gunsmoke. Bill met Sally Pole 30 years ago and they became a loving pair to each other and had a relationship many would envy. Bill was preceded in death by his parents, a son, John, brother Fred and sister Angeline. He is survived by the love of his life, Sally, a son Kris, daughter Sue, sisters Joan and Mary Jane, numerous grandchildren, great-grandchildren, nieces, nephews and his loving Yooper family. A memorial will be held later when Covid 19 is behind us. Interment will take place at the St. Agatha Catholic Cemetery in Gagetown, Michigan in the spring. The Reid Funeral Service and Chapel, L’Anse has been entrusted with the arrangements.

William Joseph "Bill" Matt was born in Colwood, Michigan on April 2, 1928 and passed away peacefully at the age of 92 at Bayside Village in L'Anse, Michigan on December 31, 2020. Bill was a lifetime farmer and owned and operated his centennial... View Obituary & Service Information

The family of William Joseph "Bill" Matt created this Life Tributes page to make it easy to share your memories.

Send flowers to the Matt family.