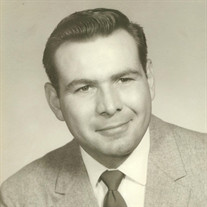 William L. “Bill” Swartz, age 90, of L’Anse, MI passed away at his home on Sunday, February 2, 2020. He was born in L’Anse on April 14, 1929 the son of the late John “Mickey” and Clara (Knapp) Swartz. Bill graduated from L’Anse High School in 1947 where he played football and ran track. He had sailed on the Great Lakes for 5 years, two of those years were during the summer of his Junior and Senior years of high school. During that time, he would always come home on leave to help support this family. Bill served in the United States Army during the Korean War. Following his honorable discharge from the Army, he attended Michigan Technological University on the GI bill and received his bachelor’s degree in Mechanical Engineering. Bill was employed by Baker Perkins in Saginaw, MI for over 20 years where he became Engineering Manager of a world-wide bakery equipment manufacturer. After working in lower peninsula for all these years, and raising a family, he had the opportunity to move back to the UP and jumped at the chance. He finished his working career at American Fabricators located south of Sault Ste. Marie where he was the Plant Manager of an induction heating coil manufacturer, located at the old Kincheloe AFB. He moved to Pequaming, MI after retiring where he enjoyed the company of all his family and friends who he truly loved and cared about. Bill married the love of his life the former Anna Wallin in Baraga, MI on October 30, 1953. She preceded him in death on April 3, 2017. Bill was a member of the Zeba Indian Mission United Methodist Church, former member of the L’Anse Hospital board, Keweenaw Bay Indian Community, L’Anse VFW #3897, L’Anse American Legion Post #144, Skanee Bunny Club. Bill enjoyed fishing, hunting, bowling, playing cards, visiting and gardening. Bill is survived by his loving sons Bruce (Valerie) Swartz of Navarre, Ohio and Gary (Diane Koskela) Swartz of Chassell, MI, grandchildren Brian, Stephanie and Anna, great grandchildren Brielle Grace and Ari Vivian, brothers Ward (Nancy) Swartz of Millington, MI and Roland (Cheryl “Dodo”) Swartz of L’Anse, sister Amelia “Dolly” Sapcut of Baraga and numerous nieces, nephews and cousins. He is also survived by his very good friend, fellow card player and care giver Carol Eilola. Bill was preceded in death by his parents, his wife, his son Brian "Bims", brothers Wayne, Clyde, Jerry and infant brother Baby Blue and his sister Pearl Thoresen. A memorial funeral service for Bill will be held at 11 a.m., Monday, February 10, 2020 at the Reid Funeral Service and Chapel, L’Anse with Pastor Nathan Reed officiating. The family will greet friends at the funeral chapel on Monday from 9 a.m. until the time of the funeral service. Baraga County area veterans, under the direction of the Baraga American Legion Post #444 will conduct military honors at 10:30 am. Immediately following the memorial funeral service, the family invites friends to join them for fellowship and luncheon at the Zeba Hall. Memorials in Bill’s honor may be directed to the Zeba Indian Mission United Methodist Church. Envelopes will be available at the funeral chapel. The Reid Funeral Service and Chapel has been entrusted with the funeral arrangements.

The family of William L. "Bill" Swartz created this Life Tributes page to make it easy to share your memories.

Send flowers to the Swartz family.