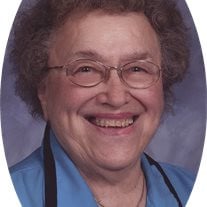 ZENOBIA A. “ZAN” VANABEL, age 90, of L’Anse passed away suddenly on Tuesday, August 2, 2011 at her residence. She was born in Chicago, Illinois on July 11, 1921 the daughter of the late Joseph and Mary Ann (Marcinkowski) Kubicki. Zan graduated from Calumet High School, Chicago, IL. in 1940. During WWII she was active in the USO from 1942 until 1946. After moving to L'Anse in the 1960's Zan worked as a cook at the Liberty Bell and for over 20 years at the Hilltop Restaurant, retiring in 1991. She was a member of Sacred Heart Catholic Church, L’Anse. She was a member of the former St. Rita’s Circle, former member of the Baraga County Women’s Softball League an active volunteer in TRIAD, Skilled Nursing Unit, and the St. Vincent de Paul store. Zan enjoyed bowling, embroidering, sewing, and gardening. She was known for her wit and her distinct sense of humor. Mrs. VanAbel is survived by her children Raymond (Jill) VanAbel of Sarasota, Florida, Michael (Candy)VanAbel of Bradenton, FL, James VanAbel of Kingsford, and Dawn (Robert) Avelenda of Tucson, Arizona, 6 grandchildren, and 7 great grandchildren. She was preceded in death by her brother, and 3 sisters. A Memorial Mass was offered at Sacred Heart Catholic Church, on Tuesday, August 9, 2011 at 12:00 noon with Father John Longbucco, celebrant.

The family of ZENOBIA A. "ZAN" VAN ABEL created this Life Tributes page to make it easy to share your memories.