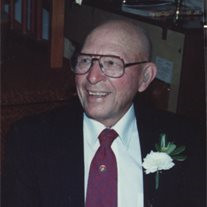 ALBERT “Chink” WALLIN, 105 years old, passed away Sunday, April 15, 2012 at Shulstad Leisure Living in Baraga. He was born in Lake Nebagamon, WI. on December 16, 1906 the son of the late Charles and Ellen (Rudd) Wallin. Chink attended school in Lake Nebagamon. Chink had worked as a tally boy in a lumberyard in Minnesota. After moving to Michigan, he married the former Edna Swanson. She preceded him in death on October 8, 1997. Chink worked as a butcher for the local Baraga stores, then he was hired as park manager for the Baraga State Park. He retired in 1972 after 32 years of park service. Chink was a member of Holy Cross Lutheran Church, Baraga. He enjoyed deer and partridge hunting, and fly-fishing. Mr. Wallin is survived by his daughter Ann (Bill) Swartz of L’Anse, grandchildren Gary, and Bruce, great grandchildren Brian (Leah), Stephanie, and Anna, sister Loretta Wroebel of Detroit, and numerous other family members. He was preceded in death by his grandson Brian, brothers Clifford, Richard, and Bill, and sisters Bessie, Marie, and Ella. A memorial funeral service for Mr. Wallin was held at 11 am, Friday, April 20, 2012 at the Reid Funeral Service and Chapel, L’Anse with Pastor Keith Swanson officiating. The family greeted friends at the funeral chapel on Friday from 10 a.m until the time of the service. Interment took place in the Baraga Cemetery. Following the memorial funeral service, friends were invited to join the family for fellowship and a luncheon in the Harrington Gathering Room, located at the funeral chapel.

The family of ALBERT "CHINK" WALLIN created this Life Tributes page to make it easy to share your memories.