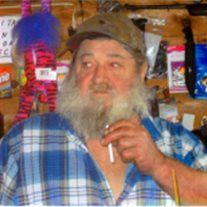 ARNE M. “MUTTY” MAKI, 64, of L’Anse, passed away Wednesday evening January 19, 2005 at Baraga County Memorial Hospital following a brief illness. He was born In L’Anse on September 15, 1940 son of the late Arne and Margaret (Seeley) Maki. Arne attended L’Anse Area Schools. He was a self-employed logger. Arne was fond of the outdoors and fishing and he loved animals, including his pet wolf and cougar.He was an active member of the Skanee Wilderness Riders. He is survived by his children, Troy (Theresa) Maki of L’Anse, Wendy (David) Rehborg of Cottonwood, AZ., and Greta (John) Hebert of L’Anse; grandchildren, Donald, Brook, Daniel, Evelyn, Brittany Lea, David, Brittany Ranae; great-grandchildren, Jace and Nathan; brother, Daniel (Denise) Maki; sister, Della Jestila of L’Anse, and numerous nieces, nephews and cousins. He is also survived by his significant other, Louella Wood of L'Anse. He was preceded in death by 2 sisters, June Mervar and Margaret Tikkanen. A visitation for Mr. Maki was held from 11 a.m. until 1 p.m. on Monday, January 24, 2005 at the Reid Funeral Service and Chapel, L’Anse. The Reid Funeral Service and Chapel, L’Anse is assisting the family with arrangements. Mr. Maki’s obituary may also be viewed and condolences sent to the family at www.rfsc.net

The family of ARNE M. MAKI created this Life Tributes page to make it easy to share your memories.