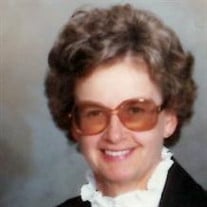 Alma Ruth Ranta, age 91, of L’Anse, MI passed away unexpectedly at her home on Friday, August 23, 2019. She was born in Pequaming, MI on October 13, 1927. Ruth graduated from L’Anse High School in 1945. She married Leonard Ranta on May 15, 1954. He preceded her in death on September 1, 1974. Ruth had worked for various local businesses as a bookkeeper. She was a member of United Lutheran Church, L’Anse and had been a former secretary at the church. Ruth enjoyed square dancing, sewing, baking, reading, doing word search and had loved to travel. Ruth is survived by her loving children, Robert Ranta of L’Anse, Joanne Mitchell of Baraga and Kathy Teddy of L’Anse, grandchildren Christopher Mitchell of Florida, Jason (Ashley) Mitchell of Iron Mountain, Kaitlyn (Ward) Wuebben of Dollar Bay, Bobbi (Jason) Edwards of Dorr, MI, Joseph Teddy of Mosinee, WI, Amber (Chad) Dowell of Marquette and Kelly (Matthew) Drjewiecki of Green Bay, WI and great grandchildren Kylie, Blair, Mason, Kenna, Peyton, Landon, Sawyer, Pierce, Mila, Noel and Lincoln. Several nieces and nephews also survive. She was preceded in death by her parents, husband, brother Walter Hill and an infant brother, sister Laila Marshall and her son-in-law Bob Teddy. Memorial funeral services for Ruth will be held at 12 p.m. Tuesday, August 27, 2019 at the Reid Funeral Service and Chapel, L‘Anse with Pastor John Ansell officiating. The family will greet friends at the funeral home on Tuesday from 11 a.m. until the time of the service. Immediately following the service, the family invites friends to join them for fellowship and a luncheon in the Harrington Gathering room, located at the funeral home. Interment will take place in the L’Anse Evergreen Cemetery. In lieu of flowers, the family suggests memorials in Ruth’s honor to be directed to United Lutheran Church, L’Anse. Envelopes will be available at the funeral home. Ruth’s obituary may also be viewed and condolences sent to the family at www.reidfuneralservicechapel.com The Reid Funeral Service and Chapel, L’Anse has been entrusted with the funeral arrangements.

The family of Alma Ruth Ranta created this Life Tributes page to make it easy to share your memories.

Send flowers to the Ranta family.