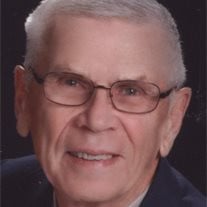 CAPTAIN DALE G. LINDSTROM, age 81, of L’Anse passed away Friday, September 6, 2013 at Marquette General Hospital following a short illness after having been surrounded by his family and friends for several days in the hospital. Dale was born in L’Anse, Michigan on April 11, 1932 to Leonard and Ellen (Olsen). He graduated from L’Anse High School in1950. He served in the U.S. Air Force and was honorably discharged upon the death of his only surviving parent, his father, as he was needed at home. His mother had died at the age of 30 years old leaving he and four other children under the age of 6. He was employed by Reid Logging and Pontiac Motors before he began sailing on the Great Lakes for Wilson Marine Transit Company along with numerous other men from Baraga County. He married Annette (Harju) on April 10, 1964 at First Lutheran Church in L’Anse, MI. He was employed by Ford Motor Company, Marine Division and Interlake Steamship Company, where he retired as Captain in 1994. Over his 39-year career on the Great Lakes there were many stories to tell, but none as significant as the night he, and the crew of the William Clay Ford, left the shelter of White Fish Bay to search for possible survivors of the Edmund Fitzgerald. Dale was a member of the United Lutheran Church, L’Anse, the L’Anse American Legion Post #144, and the Bay Shrine Club. He was a lifetime member of the Ahmed Temple, of which he was a 32nd Degree Mason. In 1991 Dale and Annette purchased a cottage on Lake Superior. This became the place he loved to be. They spent much of their summers there enjoying the beauty of the water and watching the sunsets. However, whenever family, friends, or visitors needed a place to stay, or just a relaxing weekend, they would always make the cottage available for others. His sense of compassion and generosity for those in need, whether he knew them personally or not, was one of his greatest character traits. He had a great love for dogs. Any stray that found its way to his doorstep was welcomed inside, fed, and loved, until its owner was found. He had his “dog of a lifetime” in Babe, the Irish Setter, who was his best buddy for 17 years. They were inseparable and grew old together. He is survived by his loving wife of 49 years, Annette (Harju) Lindstrom, two sons, Curtis (Marcia Mayo) of Wetmore, MI and Mark (Deanna Everson) of L’Anse. MI, and grandchildren Daniel, Ryan, Kelsey and Nicholas. Also surviving are two siblings, Lyle Lindstrom of Norwich, CT and Ellen Biekkola of L’Anse, MI, and numerous nieces, nephews, and cousins. He is preceded in death by his parents; Leonard and Ellen, two sisters; Janice Friess and Miriam Goddard. In 2012 he lost his friend and mentor Captain Donald Erickson. Funeral services for Mr. Lindstrom were held at 11 a.m., Tuesday, September 10, 2013 at United Lutheran Church, L’Anse with Pastor Greg Mileski officiating. The family received friends at the Reid Funeral Service and Chapel, L’Anse on Monday, September 9, 2013 from 6 until 8 p.m. and on Tuesday at the church from 10 a.m. until the time of the service. Baraga County area veterans, under the direction of the Baraga American Legion Post #444 conducted military honors Monday evening at the funeral chapel at 6 p.m.

CAPTAIN DALE G. LINDSTROM, age 81, of L&#8217;Anse passed away Friday, September 6, 2013 at Marquette General Hospital following a short illness after having been surrounded by his family and friends for several days in the hospital. Dale was... View Obituary & Service Information

The family of CAPTAIN DALE G. LINDSTROM created this Life Tributes page to make it easy to share your memories.