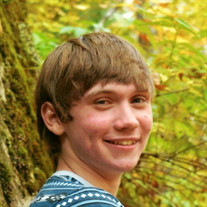 Christopher Michael Harden age 19 of Alston went home to his heavenly father after a courageous battle with chronic depression on March 31, 2018. A celebration of life for Chris will take place on Sunday, August 19, 2018 beginning at 3:30 p.m. at the pavilion behind the Alston Baseball Field in Alston, MI on M-38. The celebration was scheduled to take place on Silver Mountain but cannot because the steps to the top have been removed. We apologize for any confusion but the new site will be better for everyone. If you can, please bring a dish to pass or hot dogs and buns, blankets or chairs. There are some picnic tables available also. Any lawn games would be welcomed. There will also be music and a chance for people to share stories of Chris and how he touched our lives! Please park behind the ball field off Hoover Road, not near the Fire Department. Thank you and lets have a day of fun and togetherness in remembrance of Chris! Chris donated himself to the gift of life, which is no surprise for those of us who knew and loved him! The family was notified by Gift of Life that Chris will be touching up to 50 people with his donation. Chris was born on October 14, 1998 at Portage Hospital to James E. Harden and Carmen R. (Hulkkonen)Harden. He attended L’Anse Area Schools until his graduation in 2017. Chris was involved in the drama club, his best performance by far was Heikki the “Bus Driver” from the play “High Schoolers guide to the galaxy”. Chris was in 4 different drama productions. Chris was also a member of band, pep band and marching band. He participated in many band competitions and band trips. Chris had a short career in school politics until he realized how difficult motivational leadership was. Chris took part in can drives, car washes, spaghetti dinners, home comings and band bus breakdowns. Chris had many mentors and role models at LHS and in the community. We the family thanks each one of you for the impact you had on Chris’ life. During Chris’ senior year he became a licensed EMT and also then became a first responder with the Pelkie Volunteer Fire Department. Chris was currently pursuing a paramedic career through Bay College. He was a member of the paramedic club and an active participant in training labs. He helped make these labs real and imaginative. Thank you to all who helped Chris pursue these dreams. Some may not have known what a battle Chris was facing because of his chronic depression. Although Chris was following his medical protocol his depression was robbing him of his ability to feel sustained happiness or joy. Chronic depression could be described as a brain malfunction where a person may lose the ability to think clearly or rationally. They also may lose their coping skills and ability to problem solve further limiting the choices they feel they have. This is what we have learned and observed during our walk with our son/brother Chris. In honor of Chris please help us shine a light on depression in our community and help make a difference for someone else. Depression/Mental Illness is NOT a choice; something you can just snap out of; or a weakness however it does weaken our ability to think cope and problem solve. Lets not look for blame let’s look for a solution. Thank you Chris for the light and laughter you brought into our lives. You were fun, loving, giving,compassionate and maybe the biggest goofball we all knew. You always kept us on our toes with your amazing imagination on most days and your fun overactive imagination during the Halloween season. Chris is survived by his mother Carmen (Hulkkonen) Harden, his surrogate dad Bill Hansen, brother Jim (Jessica) Harden and their 3 sons Dylan, Bradey and Mack; brother Tyler (Alechia) Hulkkonen and their daughter Aleena; sister Jerri (Wade) Harden and their 2 sons Weston and Mark; brother Jeff (Kat) Harden; also surviving are all of his close friends and numerous aunts, uncles and cousins. He is preceded in death by his father James E. Harden; maternal and paternal grandparents; numerous special mentors, aunts, uncles and cousins. Honorary donations in Christopher’s memory may be made to the Apostolic Lutheran Church in Alston or to the family and they will make the donations on behalf of Christopher’s wishes. God is LOVE...someone to love he lends ‘US’. The Reid Funeral Service and Chapel, L’Anse has been entrusted with the arrangements.

Christopher Michael Harden age 19 of Alston went home to his heavenly father after a courageous battle with chronic depression on March 31, 2018. A celebration of life for Chris will take place on Sunday, August 19, 2018 beginning at 3:30 p.m.... View Obituary & Service Information

The family of Christopher Michael Harden created this Life Tributes page to make it easy to share your memories.

Christopher Michael Harden age 19 of Alston went home to his...

Send flowers to the Harden family.