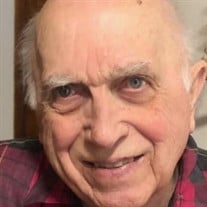 Donald Albert “Type” Connor passed away on Saturday, June 5, 2021 at Baraga County Memorial Hospital in L’Anse, MI following a brief illness. Type was born in L’Anse on November 21, 1932 to William and Esther (Dahlstrom) Connor. He was the 4th of nine children. He graduated from L’Anse High School, enlisted in the United States Army and served for four years. Upon his return, he spent the majority of his working years employed by Quality Foods, which later became Fraki’s. Type was well known for his service to the community through the American Legion, cooking for Legion dinners and working pasty sales for many years. He traveled extensively for Legion activities, assisting in election of several State Commanders. Type was Finance Officer, Zone Commander for the entire UP, 12th District Commander, and was a member of several state and national committees. He also served as a volunteer for the L’Anse Fire Department for 20 years. Type was a member of Sacred Heart Catholic Church, L’Anse. Surviving are his siblings Dennis Connor, Carol Froberg and Darliene Smith, and numerous nieces and nephews, including special nephew Scott Connor. He was preceded in death by his parents, sisters Betty Sullivan, Bernadette Hautanen, and Patricia Kemppainen and brothers Father William Connor and infant Robert Henry. Type will be greatly missed by his family and his dog Molly. A Mass of Christian Burial will be celebrated at 11 a.m. Friday, June 11, 2021 at Sacred Heart Catholic Church, L’Anse with Father Corey Litzner, celebrant. The family will greet friends on Thursday, June 10, 2021 at the Reid Funeral Service and Chapel, L’Anse from 6 until 8 p.m. with the L’Anse Fire Department conducting a service at 7:45 p.m. A visitation will also be held Friday morning at the church from 10 a.m. until the time of the the Mass. Immediately following Mass, military honors and interment will take place in the L’Anse Evergreen Cemetery. Following interment, friends are invited to join the family at the church for fellowship and a luncheon. Type’s obituary may also be viewed and condolences sent to the family at www.reidfuneralservicechapel.com. The Reid Funeral Service and Chapel has been entrusted with arrangements.

The family of Donald A. "Type" Connor created this Life Tributes page to make it easy to share your memories.

Send flowers to the Connor family.