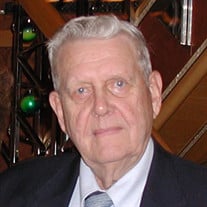 Donald Isaac “Don” Holso, 87, of L’Anse, Michigan, passed away Monday, February 25, 2019. Born March 9, 1931, Don was the son of the late Isaac and Tyyne (Ahonen) Holso. Don graduated from L’Anse High School in 1949 and was a lifelong resident of the L’Anse area. As a young boy Don met Henry Ford in Alberta, a photograph from that visit is displayed in the Alberta Historical Museum. Once he had graduated high school, Don served in the US Navy aboard the USS Rendova during the Korean War. After being discharged, he met and married his wife Jeanette while he was a wheelman on the ore boats. When his daughter Charlene was born, Don began working at the former Celotex Corp in L’Anse as a fabrication superintendent and remained with the company until his retirement. He was a member of United Lutheran Church, L’Anse and the L’Anse American Legion Post #144. Don married his wife Jeanette in 1958. They had two children, Charlene (born 1958) and Donald James (born 1961). In 1993, Don lost Jeanette to cancer. He married Elizabeth “Betty” Holso in 1994. They traveled together and spent winters in Texas for several years. Don loved to tell stories of his adventurous youth. Don was preceded in death by his parents; his wife, Jeanette; his son, Donald James; and his second wife, Betty. He is survived by his daughter, Charlene (Ted) Larsen; his daughter-in-law, Christine Holso; his six grandchildren, Christopher (Sangeetha) Larsen and their children Jaya and Asha, Nicholas (Kristi) Larsen and their children Kaylin and Brecken, Bryana (Del) Martin and their daughter Adalyn, Danielle Holso, CarliAnn Holso, and Jennifer Holso; his stepdaughter Janet (Fred) Roberts, step-grandchildren Michael (Cindy) Roberts and their children Dylan and Jeffrey, and Angie (Michael) Mayo and their children Christopher Mayo and Brianna (Cason) Ansell. Funeral services for Don will be held at 11 am Thursday, February 28, 2019 at United Lutheran Church, L'Anse with Pastor John Ansell officiating. The family will greet friends at the Reid Funeral Service and Chapel, L'Anse on Wednesday, February 27, 2019 from 5 pm until 7 pm and at United Lutheran Church on Thursday from 10 am until the time of the funeral service. Immediately following the funeral service, the family invites friends to join them for fellowship and a luncheon in the church hall. Graveside services will take place at 12:00 p.m. Saturday, June 22, 2019 in the Aura Cemetery with Pastor John Ansell officiating. Baraga County area veterans, under the direction of the Baraga American Legion Post #444 will conduct military honors. The Reid Funeral Service and Chapel, L'Anse has been entrusted with the funeral arrangements. Condolences may be sent to the fmaily at www.reidfuneralservicechapel.com

The family of Donald I. "Don" Holso created this Life Tributes page to make it easy to share your memories.

Send flowers to the Holso family.