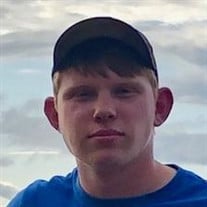 Dylan Michael Roberts, age 17, of Aura, Michigan passed away Monday, February 17, 2020. He was born in Hancock, MI on July 8,2002 the son of Michael and Cindy (Sturgeon) Roberts. Dylan was attending L’Anse High School. He had been in the band 6th grade through 10th and played basketball through 10th grade and currently was taking Industrial Education Classes in the Construction Trades. He was hard working and had been employed at Mr. Tire in Baraga and last summer for the Village of Baraga, shoveled roofs and cut the grass at the church and ballfield. He was a member of L’Anse United Methodist Church. Dylan enjoyed working on cars, fishing, 4 wheeling, snowmobiling and hanging out with his buddies. Dylan is survived by his loving parents Mike and Cindy Roberts of Aura, his brother Jeffrey of Aura, grandparents Fred and Janet Roberts of Aura and Michael and Dawn Sturgeon of Washington State, his aunt Angie (Mike) Mayo of Aura, his uncle Jeff Sturgeon of Washington State, cousins Christopher Mayo, Brianna Mayo, Jacob Sturgeon and Alivia Sturgeon and numerous other family members. Funeral services for Dylan will be held at 6 p.m. on Monday, February 24, 2020 at the Reid Funeral Service and Chapel, L’Anse with Pastor Nathan Reed and Father Corey Litzner officiating. The family will greet friends at the funeral home on Monday from 4 p.m. until the time of the funeral service. Spring interment and graveside services will take place at 11 a.m. on Saturday, May 30, 2020 in the Aura Cemetery. Dylan’s obituary may also be viewed and condolences sent to the family at www.reidfuneralservicechapel.com The Reid Funeral Service and Chapel, L’Anse has been entrusted with the funeral arrangements.

Dylan Michael Roberts, age 17, of Aura, Michigan passed away Monday, February 17, 2020. He was born in Hancock, MI on July 8,2002 the son of Michael and Cindy (Sturgeon) Roberts. Dylan was attending L&#8217;Anse High School. He had been in... View Obituary & Service Information

The family of Dylan Michael Roberts created this Life Tributes page to make it easy to share your memories.

Send flowers to the Roberts family.