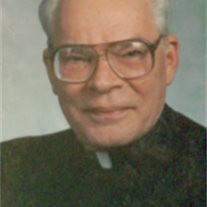 FATHER EDWARD J. WENZEL, 78, of Baraga, MI. passed away at his residence on Monday, May 2, 2005. He was born in Goodman, Wisconsin on June 27, 1926 son of the late Frank and Anna (Lang) Wenzel. He was a member of St. Ann’s Catholic Church, Baraga, MI., and was a 4th degree Knights of Columbus. Father graduated from Salvatorian High School in St. Nazianz, WI. in 1945 and entered the Salvatorian Seminary in 1940. He was ordained there on June 2, 1951. He served in a number of U.P parishes, including White Pine, Ontonagon and St. Ann’s in Baraga. He retired from the Baraga parish in 1993. Father enjoyed woodworking, fishing and hunting. Father Wenzel is survived by his brothers, Frank (Connie) Wenzel of Aurora, WI. and Bernard Wenzel of IL.; sisters, Theresa Page of Milwaukee, WI., Delores Macknamara of Green Bay, and Sister Francis Wenzel of Manitowoc, WI. He is also survived by his friend and caretaker, Carol Gravier of Baraga. He was preceded in death by his brother, Joseph. A Mass of Christian burial was celebrated at 11:00 a.m. on Friday, May 6, 2005 from St. Ann’s Catholic Church, Baraga with Bishop James Garland as Celebrant and diocesan priests as Con-Celebrants. Father Tom Schmied was the homilist. Visitation for Father was held on Thursday, May 5, 2005 from 6 until 8 p.m. at St. Ann’s Catholic Church and 1 hour prior to the Mass at church on Friday. A parish prayer service was held on Thursday evening at 7 p.m. followed by a Knights of Columbus rosary at 7:30 p.m. Interment took place in the Assinins Cemetery, Assinins, MI. The Reid Funeral Service and Chapel, L’Anse has been entrusted with funeral arrangements

The family of EDWARD J. WENZEL created this Life Tributes page to make it easy to share your memories.