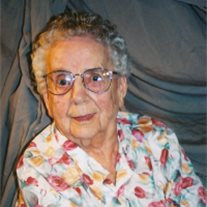 ELNA M. TARVAINEN, 93, of L’Anse passed away Thursday, January 24, 2008 at Baraga County Memorial Hospital’s Skilled Nursing Unit following a lengthy illness. She was born in Watton, MI. on April 21, 1914 the daughter of the late William and Silja (Nurkkala) Salli. She attended school in Watton and graduated from Baraga High School. Elna married August Tarvainen in Calumet on July 20, 1935. He preceded her in death in 1992. She worked as a grocery clerk in her younger days, and then as bookkeeper for the Covington Rest Home. Elna was a member of Trinity Lutheran Church. She was former Covington township clerk. Elna enjoyed reading. crossword puzzles, knitting, doing handiwork, and spending time with her grandchildren. Mrs. Tarvainen is survived by her loving children, Russell (Arlene) Tarvainen of Watton, Rodney (Gail) Tarvainen of Covington, 6 grandchildren, Kristian, Rebecca, Beth, Rodney, Jon, and Terry, 10 great grandchildren, 2 great-great grandchildren, and sister, Elvie Pitcher of Livonia. Numerous nieces nephews, and cousins also survive. She was preceded in death by 2 sisters, and 3 grandchildren. Funeral services for Mrs. Tarvainen were held at 4 p.m. Monday, January 28 2008 at the Trinity Lutheran Church, Covington with Pastor Mark Reinsch officiating. Spring interment will take place in the Covington Cemetery. The family received friends on Sunday, January 27, 2008 from 5 until 7 p.m. at the Reid Funeral Service and Chapel, L’Anse and at the church on Monday for 1 hour prior to the funeral service. Memorials in Mrs. Tarvainen’s honor may be directed to the Trinity Lutheran Church.

The family of ELNA M. TARVAINEN created this Life Tributes page to make it easy to share your memories.