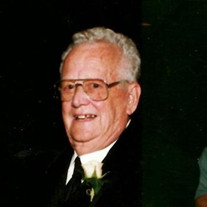 Earl John Harrington, age 96, of L'Anse, MI passed away Friday, April 5, 2019 at D.J. Jacobetti Home for Veterans in Marquette, MI. He was born in Hancock, MI on October 26, 1922 the son of the late John and Edna (Sibilsky) Harrington. Earl graduated from L’Anse High School and then joined the US Navy during WWII and served in the Philippines from 1943 until 1945. He graduated from Michigan Tech in 1950 with his degree in mechanical engineering. Earl worked for Overhead Conveyor Company for 35 years. He married the former Catherine Brus on November 8, 1945, they were married for 62 years. They raised their 6 children in St Clair Shores and in later years Oxford. After retiring, they returned to L’Anse. Kate passed away on April 24, 2007. Earl was a member of Sacred Heart Catholic Church, L’Anse, the Knights of Columbus, L’Anse American Legion Post #144 and the L’Anse VFW Post #3897. He enjoyed spending time at camp in Twin Lakes, hunting, fishing and making maple syrup with his brother. Earl is survived by his loving children, Robert (Deanna) Harrington, Mary Kay Harrington and Mike (Nancy) Harrington, grandchildren Shaun, Pat, Joe, Dee, Robin, Josh, Jeremy, PJ, Brenna, Kevin, Kyle, Katie, Rachel and Luke, numerous great grandchildren, brother Jerry Harrington and sister Betty Reid. He was preceded in death by his wife, sons John, Jim and Pat and sisters Myra and Lois. The family will greet friends at the Reid Funeral Service and Chapel, L'Anse on Tuesday, April 9, 2019 from 5 p.m. until 8 p.m. A Mass of Christian burial will be celebrated at 11 a.m. on Wednesday, April 10, 2019 at Sacred Heart Catholic Church, L'Anse with Father Corey Litzner, celebrant. Friends are invited to join the family for fellowship and a luncheon in the church hall immediately following the Mass on Wednesday. Spring interment with graveside services and military honors will take place at 10 a.m., Monday, May 16, 2019 in the L'Anse Evergreen Cemetery with Deacon John Cadeau officiating. Memorials in Earl's honor may be directed to Sacred Heart School. Envelopes will be available at the funeral home and church. The Reid Funeral Service and Chapel, L'Anse, MI has been entrusted with the funeral arrangements.

Earl John Harrington, age 96, of L'Anse, MI passed away Friday, April 5, 2019 at D.J. Jacobetti Home for Veterans in Marquette, MI. He was born in Hancock, MI on October 26, 1922 the son of the late John and Edna (Sibilsky) Harrington. Earl... View Obituary & Service Information

The family of Earl J. Harrington created this Life Tributes page to make it easy to share your memories.

Send flowers to the Harrington family.