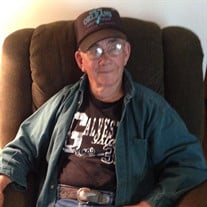 Emil J. Anderson, Jr., 83, (aka The Big Swede) of L’Anse and formerly of Kenton, MI passed away on January 27, 2017 in Crystal Falls, MI. He was born on September 13, 1933 in Stambaugh, MI to Emil and Selma (Johnson) Anderson. He grew up in Beechwood and married Gloria Hansen on October 24, 1959 in Kenton, MI and had two daughters. He was very loved. Emil served in the National Guard and US Army and was stationed in Germany. After leaving his country’s service, he moved to Kenton in 1955 and worked as a logger, miner and road construction. Finding his niche as a millwright, he recently became an honorary lifetime member of United Brotherhood of Carpenters and Joiners of America – Local Union 1510. He was a self-proclaimed “jack of all trades, master of none”. Emil was an avid outdoorsman and loved hunting and fishing, although in later years, he was happiest riding his lawn mower or blowing snow. He loved to talk to people and not a cross-country trip went by without him knowing someone at numerous road side stops. Morning coffee, talking with friends and playing cards at Hoppy’s Bar were a favorite part of his day, along with watching the Green Bay Packers. After living in Kenton for nearly 60 years, Emil and Gloria moved to L’Anse in 2015. Emil is preceded in death by his parents and sister, Elaine Kirst. He is survived by his loving and devoted wife Gloria; daughter Sandy (Jerry) Staffeld of Houston, TX; daughter Karen Johnson (Lee DeLeon) of L’Anse; grandson Alan Takalo of L’Anse; and sister Carol Cooper of Long Lake, WI, as well as numerous relatives and friends. A memorial service was held at 11 a.m. on Thursday, February 2, 2017 with Pastor John Ansell officiating. The family greeted friends at the Reid Funeral Service and Chapel, L’Anse on Thursday from 10 a.m. until the time of the memorial service. Baraga County area veterans, under the direction of Baraga American Legion Post #444 conducted military honors at the funeral chapel on Thursday at 10:30 a.m. Immediately following the memorial service, the family invited friends to join them for fellowship and a luncheon in the Harrington Gathering room, located at the funeral chapel. Spring interment will take place in the Kenton Cemetery In lieu of flowers, memorials may be made to the Iron County Medical Care Facility, 1523 U.S. Highway 2, Crystal Falls, MI 49920.

The family of Emil J Anderson created this Life Tributes page to make it easy to share your memories.

Send flowers to the Anderson family.