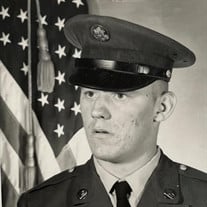 Fred E. Lantz, age 67 of L’Anse, MI passed away Tuesday, November 16, 2021 at his home with his loving family by his side. He was born in Crystal Falls, MI on September 25, 1954 the son of Don and Janet (Kermeen) Lantz. Fred graduated from North Dickinson High School in 1972. He proudly served in the United States Army and United States Navy. Fred had been employed with the United States Postal Service and Baraga County Court House. He was a member of Zion Lutheran Church in Felch, MI, and the former Eagles Club #2287 in L’Anse. Fred was an avid Detroit Lions fan, and enjoyed hunting, fishing, camping, gardening, beer drinking, playing guitar and working on cars with his son. Fred is survived by the love of his life Elvera Lantz of L’Anse, his children Malisha Maki of L’Anse, Mindy Lantz of Elo, MI and Don (Karina) Lantz of Sheboygan, WI., grandchildren Miah, Megan, Anna, Donovyn, Emberlee, Larry and Aubreigh, great grandchildren Ali Mae and Cyrena Grace, his parents Don and Janet Lantz of Felch, sisters Yvonne (Tom) Harteau of Felch, Shelly (Ted) Broeders of LaBranche, MI and Brenda (Karl) Kramer of Felch, and his uncle Herbert Lantz of Flech. Numerous nieces, nephews and cousins also survive. He was preceded in death by his grandparents Ed and Anna Lantz, and aunts and uncles. A memorial funeral service for Fred will be held at 1 p.m. central time on Monday, December 6, 2021 at Zion Lutheran Church in Felch, Michigan with Pastor Lee Liverance officiating. The family will greet friends at the church on Monday from 12 p.m. central time until the time of the memorial service. The family invites friends to join them for fellowship and a luncheon at the church immediately following the memorial service. Military honors and interment will take place in the spring in the Felch Cemetery, Fred’s obituary may also be viewed and condolences sent to the family at www.reidfuneralservicechapel.com The Reid Funeral Service and Chapel, L’Anse has been entrusted with the arrangements.

The family of Fred E Lantz created this Life Tributes page to make it easy to share your memories.

Send flowers to the Lantz family.