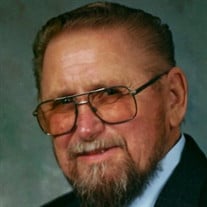 Gerald M. “Jerry” Hiltunen, age 77, of Nisula, MI passed away Monday, May 20, 2019. He was born in L’Anse, MI on November 25, 1941, the son of the late Fredrick and Alli (Ala) Hiltunen. Jerry graduated from Baraga High School in 1960. Following graduation, he served in the National Guard. Jerry married the former Donna Carlisle at Trinity Lutheran Church, Trout Creek, MI on August 19, 1961. He had worked for various construction companies as a carpenter until his retirement. Jerry was a member of Mission United Lutheran Church, Pelkie, MI, the Ottawa Sportsman’s Club and the carpenters union. He enjoyed fishing, hunting, camping and woodworking. Many of his wood creations were given to his family. Jerry loved spending time with his grandchildren and great grandchildren. Jerry is survived by his loving wife, Donna Hiltunen of Nisula, son Ricky Hiltunen of Nisula, daughter Ann Landwehr of Trout Creek, MI, grandchildren Tanya Brunton, Brandi Pitkanen and Kersti Pitkanen, great grandchildren Addison Pitkanen-Bubolz, Riley Pitkanen-Bubolz and Wesley Pitkanen-Maxey and his sister Lucille Bartanen of Marquette, MI. Numerous nieces, nephews and cousins also survive. He was preceded in death by his parents, daughter Sally, sister Katherine, brother Raymond and nephews Peter and Danny. Funeral services for Jerry will be held at 4 p.m. Friday, May 24, 2019 at the Reid Funeral Service and Chapel, L’Anse, MI with Pastor Kellan Weyer officiating. The family will greet friends at the funeral home from 2 p.m. until the time of the funeral service. Immediately following the funeral service, the family invites friends to join them for fellowship and a luncheon in the Harrington Gathering Room, located at the funeral home. Military honors, under the direction of the Baraga American Legion Post #444 and graveside funeral services with Pastor Kellan Weyer officiating will be held at 11 a.m., Saturday, August 3, 2019 in the Nisula Cemetery, Nisula, Michigan. Jerry’s obituary may also be viewed and condolences sent to the family at www.reidfuneralservicechapel.com The Reid Funeral Service and Chapel, L’Anse has been entrusted with the funeral arrangements.

The family of Gerald M. "Jerry" Hiltunen created this Life Tributes page to make it easy to share your memories.

Send flowers to the Hiltunen family.