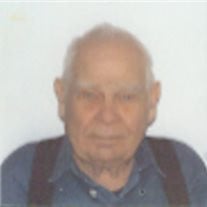 Mr. Harold Mitchell, 82, a life-long resident of Baraga, MI. died suddenly at his residence on August 4, 2009. Harold was born on April 4, 1927 in Baraga, the son of the late Edward and Esther Mitchell. He attended Baraga High School and enlisted in the US Army where he served in France as MP escort to a General. Following his honorable discharge, he married Aurelia St. Onge of L'Anse, MI. and raised 6 children. Harold was a mechanical wizard and his talents were used to assist Phil LaTendresse in the production of the first Carry-Lift. He established J & H Welding in 1951 and became a significant employer in Baraga County. After his alleged retirement from J & H, he owned and operated a gold mine in Chicken, Alaska until 2007 as well as H & A Mitchell Tree Farm in Baraga. Harold believed in “hard work” and despite his failing health he continued to work his land until days before he died. Harold's camp door was always open. He took immense pleasure in socializing with family, new and old friends and it was well known that no one was a stranger and he earnestly welcomed anyone that attended his Sunday suppers and twice-a-year pig roasts. Never once was he first in line to eat and consistently let the attendees eat first before he would fill his plate. Planning, learning through sharing, laughter and card playing were constants at camp. Harold was a member of the American Legion Post 444, the Alston VFW and a life-long member and past President of the Ottawa Sportmen's Club. In 1981 the club burned down and it is recorded that Harold acted as “volunteer leader for the rebuilding project and coordinated all the various aspects of construction, even sawing many of the materials on his personal portable sawmill.” Preceding him in death are his son, Paul Mitchell; brothers Bob, and Bill and sisters Margaret McCutcheon and Gladys Rendell. Harold will be sorely missed by his beloved wife, Aurelia; his children, Allan (Marilyn) Mitchell, Joan (Thomas) Miller, Gail (Harold) Herrala, Ronald (Joanne) Mitchell and Michael Mitchell; his brother, Carl Mitchell; 14 grandchildren, 19 great grandchildren, numerous nieces, nephews and a host of friends. Harold's funeral service was held at 11 a.m. Saturday, August 8, 2009 at the Reid Funeral Service and Chapel, L'Anse with Pastor John Henry officiating. The family received friends at the funeral chapel on Friday, August 7, 2009 from 6 until 8 p.m. and on Saturday from 10 a.m. until the time of the service. Baraga County area veterans, under the direction of the Baraga American Legion Post 444 conducted military honors at the funeral chapel at 10:30 a.m. Following the services friends joined the family for fellowship and a luncheon in the Harrington Gathering room, located at the funeral chapel.

Mr. Harold Mitchell, 82, a life-long resident of Baraga, MI. died suddenly at his residence on August 4, 2009. Harold was born on April 4, 1927 in Baraga, the son of the late Edward and Esther Mitchell. He attended Baraga High School and enlisted... View Obituary & Service Information

The family of HAROLD E. MITCHELL created this Life Tributes page to make it easy to share your memories.