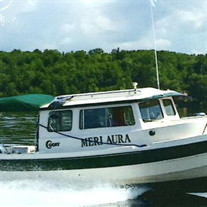 Hank Clow took his final nap at his beloved Aura home on January 8, 2019 surrounded by his immediate family. He was born in Laconia, NH on September 27, 1932 to Stephen and Jean (Park) Clow. Although most of his 86 years were spent away from New Hampshire, he never lost his “Yankee” accent as he shared his life stories with his family and friends. After graduation from Laconia High School he entered the University of New Hampshire. The Korean Conflict interrupted his studies for a while as he served in the US Army in Korea and later in Japan. He returned to school and using the GI Bill completed his degree in Civil Engineering at New England College. His first engineering job was with the State of New Hampshire, Department of Highways where he became resident engineer on the connecting link of the Kangamagus Highway through the White Mountains of New Hampshire. An almost 61year marriage to Patricia Olkkonen began on January 25, 1958 and in 1959 they decided to journey west in their remodeled VW microbus with young daughter and large German shepherd aboard. The journey ended on the Olympic Peninsula in Washington state where Hank accepted a position with the US Forest Service. His career found the family relocating throughout the Northwest with postings in Utah, Idaho, Oregon and finally, California. A career highlight was his involvement in the development of the California portion of the Pacific Crest Trail. He retired in 1987. The UP of Michigan fit all the requirements for retirement plans and the community of Aura provided the perfect 40-plus acres to begin the next phase of living for Hank and Pat. Sailing had been an important part of life while in the west and thus it continued in retirement. In later years “Tuulen Aura”, his 28 ft. Benetau motor sailor was traded in for “Meri Aura”, a 22 ft. C-Dory power boat. Lake Superior was the principal cruising area, but journeys to other waterways of the north and southeast provided further adventures. Each summer their Aura home became a gathering spot for many C-Dory owners from around the country as they were introduced to the wonders of the Big Lake. An annual journey to Isle Royale highlighted their stay. He is survived by his wife Pat, his children, Petreena Clow and Aarne (Paulette) Clow, grandchildren, Austin (Lisa) Clow, Sakari (Tera) Clow, Patrick (Kristy) Clow and Jonathon Clow, great-grandchildren are Steele and Story Clow. He was preceded in death by his parents and sisters, June LaVallee and Barbara Nash. There are no services scheduled at this time. Memorials honoring Hank may be directed to a charity of choice or Baraga County Home Care and Hospice. The Reid Funeral Service and Chapel, L’Anse has been entrusted with the arrangements.

Hank Clow took his final nap at his beloved Aura home on January 8, 2019 surrounded by his immediate family. He was born in Laconia, NH on September 27, 1932 to Stephen and Jean (Park) Clow. Although most of his 86 years were spent away from... View Obituary & Service Information

The family of Henry "Hank" Clow created this Life Tributes page to make it easy to share your memories.

Hank Clow took his final nap at his beloved Aura home on January...

Send flowers to the Clow family.