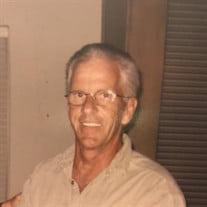 Homer W. “Smokey” Collins, Jr., age 71, of Skanee, passed away at his home on Sunday, November 5, 2017 with his family by his side. He was born in Skanee, Michigan on October 11, 1946, the son of the late Homer and Dorothy (Glover) Collins. Smokey attended school in Skanee. He served in the United States Army during the Vietnam Era. Smokey married the former Mona Johnson in L’Anse on January 20, 1979. He had worked as a roofer for various roofing companies and retired in 2007 from Topall Roofing in Minnesota. Smokey enjoyed fishing, hunting, going to camp, side by side rides and just being outdoors. He was a very meticulous man and had a very cheerful personality. Smokey loved spending time with his children and grandchildren. Smokey is survived by his loving wife Mona, children Jeffrey (Shay) Collins of Oklahoma, Tammy Owens Collins of Oklahoma, Terri Pruitt Collins of Oklahoma, Jamie Solka Collins (Amy Schultz) of L’Anse, Heidi Collins of Skanee and Bryan Collins (Rachel Parker) of Skanee, grandchildren Jordan, Jerea, Tisha, Chastidy, Kevin, Michael, Blake, Cody, Roudy, Kiera, Bryant, Brayden, Kaylynn, Mackenzie and Keegan, brother Scott (Cid) Collins of Skanee, sisters Nancy Everson of L’Anse, Geri Seavoy of L’Anse, Patti VanAbel (Bob Hollon) of L’Anse, Christine (Joe) Brazeau of L’Anse, Lucy (Dan) Dupras of Crystal Falls and Laurie Collins of Nevada and several nieces, nephews and cousins. He is also survived by his loyal companions, his dogs Jessi and Jaz. He was preceded in death by his parents, sister Sandy, nephews and nieces and other family members. A memorial service for Smokey was held at 7 p.m, Friday, November 10, 2017 at the Reid Funeral Service and Chapel, L’Anse with Pastor Peter Suomela officiating. The family greeted friends at the funeral chapel on Friday from 5 p.m until the time of the service. Military honors, under the direction of the Baraga American Legion Post #444 were conducted at the funeral chapel Friday at 6:30 p.m. The Reid Funeral Service and Chapel, L'Anse is in charge of the funeral arrangements.

The family of Homer W. "Smokey" Collins Jr. created this Life Tributes page to make it easy to share your memories.

Send flowers to the Collins family.