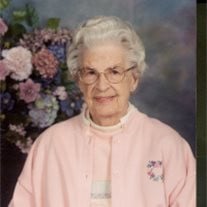 IRENE V. PETTERSEN, 95, of L'Anse, MI. passed away Thursday, March 16, 2006 at Bayside Village, L'Anse where she had been a resident since 2000. She was born in Skanee, MI. on May 11, 1910 daughter of the late Gustave and Mame (Peterson) Johnson. Irene attended school in Skanee. She married Harold Pettersen on October 23, 1937. He preceded her in death on March 12, 1994. Irene was employed as a nurse's aide at Baraga County Memorial Hospital, retiring after 17 years of service. She was a member of United Lutheran Church, L'Anse, and had been a member of VFW Post #3897 WWI Auxiliary. Irene was dedicated to her family and enjoyed baking and cooking. Mrs. Pettersen is survived by her daughters, Vivian (Art) Allert, Shirley (Dick) Gustafson, and Rosie (Donald) Funke all of L'Anse, grandchildren, Gayle, Kathy, Joanne, Kurt, Jim, Jacklyn, and Heather, 11 great-grandchildren, and brother, Ronald Johnson of Duluth, MN. She was preceded in death by 4 brothers, and 1 sister. Funeral services for Mrs. Pettersen were held at 2 p.m., Sunday, March 19, 2006 from United Lutheran Church, L'Anse with Pastor Scott Williams officiating. The family received friends on Saturday, March 18, 2006 from 6 until 8 p.m. at the Reid Funeral Service and Chapel, L'Anse and for 1 hour prior to the service at the church on Sunday. Spring interment will take place in the Evergreen Cemetery. Memorials in Mrs. Pettersen's honor may be directed to United Lutheran Church or Bayside Village Activities. Envelopes were available at the funeral chapel. The Reid Funeral Service and Chapel, L'Anse has been entrusted with arrangements.

The family of IRENE V. PETTERSEN created this Life Tributes page to make it easy to share your memories.