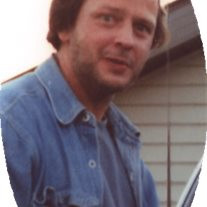 JEFFERY J. “JEFF” PERROW, age, 50, of L’Anse passed away suddenly on Tuesday, August 10, 2010 at Marquette General Hospital. He was born in L’Anse on January 21, 1960 the son of the late Ephraim and Sylvia (Destrampe) Perrow. Jeff graduated from L’Anse High School and remained a lifetime area resident. He worked as a chipper operator for the former Connor Sawmill, Baraga. Jeff enjoyed and was an avid woodworker. His passion for the past 8 years was mud bogging. He had built his own bogger and had entered competitions as far away as Wisconsin. Mr. Perrow is survived by his loving family; brothers, Ward (Sharon) Perrow, Ray Perrow, Donald (Cookie) Perrow, and David (Debbie) Perrow, sisters, Nancy (Don) Koski and Barbara (Ritchie) Asher, and brother-in-law, Jim Jarvis all of L’Anse. Numerous nieces, nephews, and cousins also survive. He was preceded in death by his sisters, Marlene Almi, Mary Ann Jarvis, and Dorothy Saari. Funeral services for Mr. Perrow were held at 7 p.m on Friday, August 13, 2010 at the Reid Funeral Service and Chapel, L’Anse with Father Brian Gerber officiating. The family greeted friends at the funeral chapel on Friday from 6 p.m. until the time of the service. Interment will take place in the Baraga Cemetery.

The family of JEFFERY J. "JEFF" PERROW created this Life Tributes page to make it easy to share your memories.