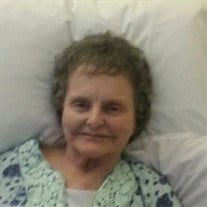 Joan P. “MA” Ross, age 86, of L’Anse passed away peacefully Saturday, June 13, 2015 at Bayside Village, L’Anse. She was born in Beardstown, IL on February 27, 1929, the daughter of the late Logan and Pearl (Wagoner) Meyer. Joan graduated from Beardstown High School in 1946. In 1965 Joan and her son Tom moved to L’Anse. She married Joseph Ross in Utica on September 4, 1970. Joan had worked as a bartender at the Baraga American Legion Post #444 for many years where she became known to everyone in town as “MA” Ross. After retirement, Joan and her husband Joseph “Joe” Ross purchased 160 acres in Baraga County and became loggers. Camp “Lucky Strike” holds many fond memories for all of her family and friends Joan’s greatest passion/accomplishment was raising her son Thomas “Tom” Macke. The two had an incredibly close relationship. Joan was also known as a caretaker of all. Whether you stopped by her home along Lake Superior in Baraga or made the trip to camp “Lucky Strike”, you could always count on an excellent home cooked meal. If you were lucky enough to get some of her fried chicken, you’d be sure to come back for more. Joan loved her family, her faith and a good game of cribbage. She collected angels and enjoyed logging and making furniture. Joan is survived by her loving family, grandson Steve Macke of Houghton, granddaughter Tracey McMahon of Escanaba, great granddaughters Zoey LaPine and Tori Edmonds, son David (Barbara) Ross of Gladstone, MI granddaughters Christyn Ross, Erin Ross and Allison Ross, son Joe (Renee) Ross Jr., grandsons Joe A. and Jacob R. Ross, daughters Shirley Ross, Nancy Ross and husband John Carter, grandson Alexandro Ross Botelho and Janet Ross. grandson William Ross Geroux. She was preceded in death by her husband, her son Tom and her brother Tom. A memorial funeral service was held at 11 am Saturday, June 20, 2015 at the Reid Funeral Service and Chapel, L’Anse with Father George Maki officiating. The family greeted friends at the funeral chapel on Saturday from 10 am until the time of the funeral service. The Baraga American Legion Auxiliary conducted a service at 10:30 a.m. Following the memorial funeral service, the family invited friends to join them for fellowship and a luncheon at the Baraga American Legion Post #444. Memorials in Joan’s honor may be directed to a charity of your choice.

The family of Joan P. Ross created this Life Tributes page to make it easy to share your memories.

Send flowers to the Ross family.