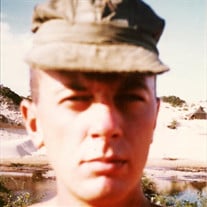 John C. “Tinker” Anderson, age 72, of Zeba, MI passed away Monday, September 3, 2018 at Tohma VA Medical Center in Tohma, WI. He was born in L’Anse, MI on February 25, 1946 the son of the late Carl and Mary (Johnson) Anderson. Following the passing of Tinkers parents, he was raised by Bob and Gladys Selkey. He attended school in Baraga. Tinker joined the Marines and served during the Vietnam War. Following his honorable discharge he married the former Virginia Friisvall. Tinker was a self-employed painter. He was an avid Elvis fan and loved listening to his music. He enjoyed painting, playing with his grandchildren and was a “hell of a dancer.” Tinker is survived by his loving family, children Lee Anderson (Caroline Ripley) of Petoskey and Venus Anderson of L’Anse, grandchildren Robert Ripley, Victoria Ripley, Pamela Smith and Velicity Smith and a great grandchild on the way. He was preceded in death by his parents and Bob and Gladys Selkey. Funeral services for Tinker will be held at 11 am Wednesday, September 12, 2018 at the Reid Funeral Service and Chapel, L’Anse with Pastor John Ansell officiating. The family will greet friends on Tuesday, September 11, 2018 from 6 pm until 8 pm and Wednesday September 12, 2018 from 10 am until the time of the service. Immediately following the funeral service, interment will take place in the Pinery Cemetery. Graveside military honors, under the direction of the Baraga American Legion Post #444 with be conducted. A luncheon will then take place at the Ojibwa Senior Center, Baraga, MI. The Reid Funeral Service Chapel, L’Anse has been entrusted with the arrangements.

The family of John C. "Tinker" Anderson created this Life Tributes page to make it easy to share your memories.

Send flowers to the Anderson family.