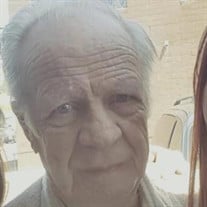 John A. Liuska, Sr. age 87, passed away in L’Anse on Tuesday November 9, 2021. He was formerly of Nisula, MI. John was born in Mass City, MI on February 19, 1934, the son of the late Eino and Aili (Martala) Liuska. He had attended local area schools. John served in the United States Army and was honorably discharged in 1958. He married the former Jean Burke at Mass City Church on September 26, 1959. She preceded him in death. John had worked at various construction companies as a carpenter. He was a member of Mission United Lutheran Church, Pelkie, MI and the Local Union #1510 which he joined on September 13 1966. John enjoyed hunting, fishing, trapping, logging, watching the Lions and had played baseball on the Alston Old Timers. His family was most important to him and he loved spending time with them. John is survived by his loving daughters Camie Harding of Nisula, and Stacy Liuska of L’Anse, grandchildren Michael, James, Cory, Jeanne, Brandi and David, great grandchildren Natalie, Harper, Charlotte, and Carly, brothers Bruce (Darlene) Liuska of Nevada, and Don (Joyce) Liuska of Alma, MI. Numerous nieces, nephews and cousins also survive. He was preceded in death by his parents, wife Jean, infant daughter Lori Ann Liuska, son John Liuska, Jr., and granddaughter Leah Harding. Graveside services and military honors will be conducted at 3 p.m.on Sunday, May 22, 2022 in the Maple Grove Cemetery in Greenland, Michigan John’s obituary may also be viewed and condolences sent to the family at www.reidfuneralservicechapel.com The Reid Funeral Service and Chapel has been entrusted with the arrangements.

The family of John A. Liuska Sr. created this Life Tributes page to make it easy to share your memories.

Send flowers to the Liuska family.