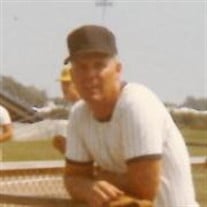 On Saturday, December 21, 2019, John G. “Jack” Smith, Sr, age 86 of L’Anse, MI passed away after a short illness. Jack was born in Detroit, MI on November 10, 1933, the son of the late John and Sarah (Spurrier) Smith. Jack graduated from Denby High School in 1952 where he lettered in baseball all four years. Immediately after high school, he signed with the Boston Red Sox Farm team where he earned the distinction of MVP for three years of his career. After playing ball for several years, Jack moved up to his family camp on the shores of Lake Superior in Aura, Michigan where he enjoyed his true passion for hunting and fishing. It was during this time that he met and fell in love with the beautiful Darliene Connor whom he married in L’Anse on January 27, 1968. Shortly after, Jack started a carpentry business and he and Darliene went on to have three children. He enjoyed anything outdoors including trapping, hunting, fishing, playing softball, and teaching all of his children and grandchildren the wonderful game of baseball. During his later years, he spent many hours traveling the back roads of Aura in his truck named “big red” with his special traveling buddy, grandson Nathaniel. Jack was an avid fan of all things “Detroit” including, baseball, hockey, and football. Jack was very strong in his belief of Christ and was a life-long member of Sacred Heart Catholic Church, L’Anse. Jack is survived by his loving family, wife Darliene of L’Anse, son Jack (Beth) Smith, Jr of L’Anse, daughters Ann (Jamie) Armstrong of Marquette, Jennifer (John) Gransell of L’Anse and special nephew, who was like a son, Scott (Bonny) Connor of L’Anse, grandchildren Timothy, Erin, Megan, Jessica, Sophie, Nathaniel and Aiden, great-grandchild Jace, brother Gerald Smith of Texas and sister Marion Smith of Lake Linden. Numerous nieces and nephews also survive. He was preceded in death by his parents, his sisters Mildred and Mary and his brother Bob. A Memorial Mass will be held at 12:00 pm, Friday, January 3, 2020, at Sacred Heart Catholic Church, L’Anse with Father Corey Litzner, celebrant. The family will greet friends at the church on Friday from 10 am until the time of the Mass. Immediately following Mass, the family invites friends to join them for fellowship and a luncheon in the church hall. Interment will take place in the L’Anse Evergreen Cemetery. Jack’s obituary may also be viewed and condolences sent to the family at www.reidfuneralservicechapel.com The Reid Funeral Service and Chapel, L’Anse have been entrusted with the funeral arrangements.

The family of John G. "Jack" Smith Sr created this Life Tributes page to make it easy to share your memories.