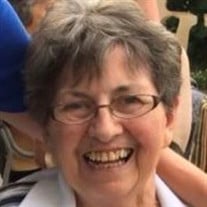 Judith G. “Judy” VanderZanden, age 75, of L’Anse passed away Monday, August 21, 2017 at Bayside Village, L’Anse with her family by her side. She was born in L’Anse on June 4, 1942, the daughter of the late Byron and Beulah (Winnega) Carkeek. Judy graduated from L’Anse High School in 1960. She attended Northland College for 2 1/2 years and then attended and received her Bachelor Degree in Teaching from Northern Michigan University. Judy married Edward VanderZanden in Champion, MI on July 13, 1963. She had worked for a number of schools in the area, including Sacred Heart Catholic School, Alston School and CJ Sullivan Elementary School. She retired after 37 years of service. Judy had been a member of the L’Anse Women’s Bowling League, Softball League, Golf League and the retired Teachers Association. She enjoyed bowling, reading and fishing. Judy loved spending time with her grandchildren and great grandchildren. Judy is survived by her loving husband Edward VanderZanden of L’Anse, children Karen (Steve) Rexford of Mississippi, Kathi (Bob) Warner of L’Anse, James “Grubby” (Henny) VanderZanden of L’Anse, and Krissi (Tim) Kristo of L’Anse, 16 grandchildren, several great grandchildren and sister Patricia (Bob) Kissel of Baraga. Nieces, nephews and cousins also survive. She was preceded in death by her parents. A Memorial service for Judy was held at 12 p.m Saturday, August 26, 2017 at the Reid Funeral Service and Chapel, L’Anse with Pastor Steve Rhoades officiating. Judy’s grandchildren were her honorary pall bearers. Immediately following the memorial service, friends were invited to join the family for fellowship and a luncheon at the L’Anse American Legion Post 144. Interment took place in the L’Anse Evergreen Cemetery.

The family of Judith G. "Judy" VanderZanden created this Life Tributes page to make it easy to share your memories.

Send flowers to the VanderZanden family.