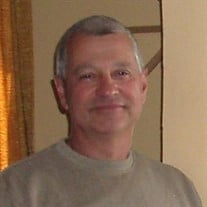 Kevin W. Shultz, age 57, of Ewen, MI passed away suddenly on Monday, July 6, 2015. He was born in Columbus, Ohio on May 8, 1958 the son of Truman “Gus” and Joan (Dunn) Shultz. Kevin graduated from New Albany High School in 1976. He served in the United States Air Force. Kevin worked as an analyst for the United States Government. He married the former Ellen Mannikko in Korea in June of 1985. Kevin had many talents including working on cars, computers and doing various construction tasks. They ran a vacation resort in Phillips, Wisconsin for many years. Mr. Shultz is survived by his loving wife of 30 years Ellen, mother Joan Nelson of KY, sister Pam Suver of Ohio, brothers-in-law Jim and Candice Mannikko of Painsdale, MI, Mike and Rebecca Mannikko of Menasha, WI, Bruce and Shelly Mannikko of Essexville, MI, father-in-law Roy Mannikko of Watton, sisters-in-law Jill Mannikko- Olesnevich of San Pedro, CA and Debbie Mannikko of Ludington, MI. Many nieces and nephews and his dog Daisy Bell also survive. He was preceded in death by his father Truman “Gus”, mother-in-law Ruby, brothers-in-law Dale, Donald and Craig. A memorial funeral service was held at 11:30 a.m. on Saturday, July 11, 2015 at the Reid Funeral Service and Chapel, L’Anse with Pastor Mark Reinsch officiating. The family greeted friends at the funeral chapel on Saturday from 10 a.m. until the time of the memorial funeral service. Baraga County area veterans, under the direction of the Baraga American Legion Post #444 conducted military honors at the funeral chapel on Saturday at 10:30 a.m. Interment took place in the Covington Cemetery at 1 p.m. The family invited friends to join them for fellowship and a luncheon at Trinity Lutheran Church, Covington following the interment.

The family of Kevin W Shultz created this Life Tributes page to make it easy to share your memories.

Send flowers to the Shultz family.