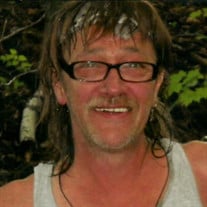 Larry John Jestila finished this life’s journey on July 26, 2019, with his family at his side. He was born August 8, 1958, in L’Anse, Michigan to Edward “Bimbo” Jestila and Della Salonen Maki Jestila. He lived in L’Anse, Marquette, and Frankfort, Michigan. Larry was known for his piano talent from an early age and performed in lounges in Marquette and for-hire occasions. He studied music theory at NMU and was recognized in Nashville, TN for his incredible talent. He wrote and composed many songs. Larry had a style all his own, known for his fabulous hair and flair for clothes, with a great sense of humor and a contagious laugh. He was a caring and kind man. Larry is survived by his two children, Christie and James, granddaughter Lacy, mother Della Jestila of L’Anse, sisters Debra Jestila Mikolaizik of Renton, WA and Shelly Jestila of L’Anse, brother Michael Jestila of Hancock, his uncle Dan Maki of Arnheim and his aunt Alice Jestila Boyd Freiberger of Flint. He was preceded in death by his father and brother Gerald “Jerry” Jestila. A memorial service and celebration of Larry’s life will be held on Monday, September 23, 2019 from 2 p.m. until 5 p.m. at the Whirl-I-Gig, L'Anse, MI. Larry’s obituary may also be viewed and condolences sent to the family at www.reidfuneralservicechapel.com The Reid Funeral Service and Chapel, L’Anse has been entrusted with the funeral arrangements.

The family of Larry J. Jestila created this Life Tributes page to make it easy to share your memories.

Send flowers to the Jestila family.