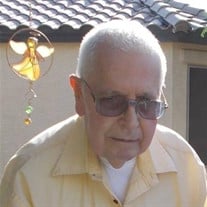 LaVern Milo Heath, age 79, of Baraga, MI passed away Friday, May 10, 2019 at Green Tree of Hubbell Rehab and Health, Hubbell, MI. He was born December 31, 1939 in Waterville Township, Pepin County, WI; son of Arthur and Carrie Adeline (Nimmo) Heath. LaVern proudly served his country in the U.S. Navy from 1958 until 1964. He served at Guantanamo Bay during the Cuban conflict. LaVern completed his GED then studied art, auto mechanics as well as several other trainings. He held various jobs including working at gas stations and in tooling. Later he worked at Boeing Aircraft in many positions including being a supervisor and trainer. He retired from Boeing Aircraft in 2003 after 25 years. Growing up in Durand, WI area LaVern enjoyed being outdoors, especially fishing. He also had a passion for art, coin and stamp collecting, building model airplanes and cars and having tropical fish tanks. LaVern is survived by his children Judith Heath of Baraga, MI, Christine (Ken) Beauchamp of Chassell, MI, Cheryl (Michael) Boyd of Rhinelander, WI, Rodney Heath of Baraga, MI, Vickie (Todd) Kinnunen of Sawyer/Gwinn, MI, Digna Yolanda (Scott) Meyer of Bonney Lake, WA, David (Sherri) Leiva of Puyallup, WA, Maritza Valenti of MA, Maria Cruz of Federal Way, WA and Yesenia (Esau) Guillen of Bonney Lake, WA. He is also survived by his first wife, Dorothy (Gauthier) Juutilainen; over 100 grandchildren and great-grandchildren; and numerous nieces, nephews and cousins. He is preceded in death by his parents, his wife Digna (Leiva) Heath, sisters and brothers-in-law, Virginia (Charles) King and Florence (James) Stewart, brother, Glen Heath and a couple grandchildren and nephews. Funeral services for Mr. Heath will be held at 11 a.m., Friday, May 24, 2019 at Durand United Methodist Church, 509 1st Ave, Durand, WI. 54737 with Pastor Grace Baldridge officiating. The family will greet friends at the church on Friday from 10 am until the time of the funeral service. Military honors and interment will be take place immediately following the funeral service at Arkansaw Memorial Cemetery, Waterville Township, Pepin County, Wisconsin. A luncheon will be served at the church following the interment. The Reid Funeral Service and Chapel, L'Anse, MI has been entrusted with the funeral arrangements. Condolences for the family may be sent to www.reidfuneralservicechapel.com

The family of LaVern M Heath created this Life Tributes page to make it easy to share your memories.

Send flowers to the Heath family.