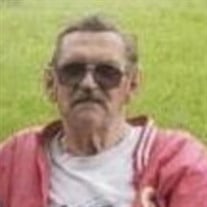 Leslie W. “Les” Franti 79 of Watton, MI went to be with the Lord on September 15, 2021. Leslie passed peacefully in his own home after a short battle with cancer. Leslie was born March 18, 1942 to William and Ellen (Salli) Franti. Leslie went to L’Anse High School. After high school, he enlisted in the United States Army as a military policeman. After his enlistment Leslie worked for the US Forest Service in Kenton Michigan. He then went to work for Cleveland Cliffs Iron Company where he was a truck driver, shovel operator, and worked on the blasting crew until his retirement. Leslie was a member of Bethany Lutheran Church in Covington, MI and lifetime member of the AmVets Post 1190. Leslie was an avid gardener, and loved planting and grafting trees. He was an ardent sports fan. He especially loved baseball. The many who knew and loved Les loved his quick wit, sense of humor, and his commitment to remain true to himself. Leslie was adamant in his beliefs. Leslie is survived by his son Michael and Janet (Uusitalo) Franti of L’Anse, and Joanna Wesner of Chassell. His girlfriend Marlene Orchard and brother Rudolph and Gloria (Rajala) Franti of Ishpeming. Grandchildren and great grandchildren: Michael Seavoy, Travis Franti, Ronnie Chagnon Jr., Matilda Chagnon, Annavey Chagnon, Cody and Sarah (Eddy) Chagnon, Stella Eddy, Yanna Wilson, Cassandra (Wesner) and Jessi Collins, Allison Collins, William Collins, Jessica (Wiideman) and Zack Posz, Emma Wiideman, Ashton Harris, Merida Posz, Loryssa Wiideman, Alexis Wiideman, Eliza Wiideman, and Thomas Wiideman. Leslie was proceeded in death by his mother and father, brothers Glenn and Michael Franti, daughter Michelle (Franti) Perry, son-in-law David Wesner and great grandson Dominic. Funeral services for Leslie will be held at 12 p.m., Thursday, September 23, 2021 at Bethany Lutheran Church, Covington with Pastor Richard Little officiating. The family will greet friends at the church on Thursday from 11 a.m. until the time of the service. Graveside military honors will be conducted at the Covington Cemetery following funeral services. There will be a luncheon following graveside services at the Covington VFW Post #8945. Les’s obituary may also be viewed and condolences sent to the family at www.reidfuneralservicechapel.com The Reid Funeral Service and Chapel, L’Anse has been entrusted with the arrangements.

The family of Leslie W. "Les" Franti created this Life Tributes page to make it easy to share your memories.

Send flowers to the Franti family.