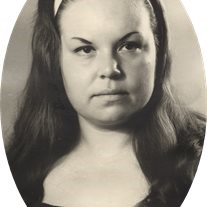 MARGIT E. WHITTY, age 65, of L’Anse, MI. passed away Monday, April 25, 2011 at Bayside Village, L’Anse. She was born in Straubing, Germany on April 2, 1946 the daughter of the late Cecil and Theresia F. (Oswald) Brown. Margit graduated from high school in Germany. Until her retirement, Margit had worked as a prep-cook and delivery person for 18 years for Meals on Wheels in L’Anse. Margit and Terry Whitty were together for 28 years and celebrated their marriage on February 13, 2009 in L’Anse. He preceded her in death on November 17, 2009. She was very proud of her German and Cherokee heritage. Margit was a member of Sacred Heart Catholic Church. She enjoyed going to the casino, playing bingo, shopping, traveling, cooking, baking, flower arranging and lunches at the Nite Owl. Mrs. Whitty is survived by her loving daughter Diana (Keith) Voakes of L’Anse, grandchildren Jan, Jesse, and Jolie, great grandchild Alyssa of Alabama, brother Alois Weiss of Germany, and nieces and nephews, including special niece and nephew Sibillie (Karl) Huber of Germany. Graveside services for Mrs. Whitty were held at the L’Anse Evergreen Cemetery with Deacon John Cadeau officiating.

The family of MARGIT E. WHITTY created this Life Tributes page to make it easy to share your memories.