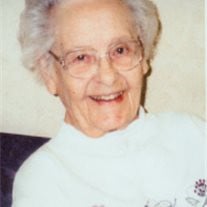 MARTHA E. TOLLEFSON, 97, of L'Anse, MI. passed away Wednesday, April 19, 2006 at Bayside Village, L'Anse following a lengthy illness. She was born in Pequaming, MI. on June 27, 1908 daughter of the late Thore and Cassie (Soli) Thoresen. Martha graduated from Pequaming High School in 1926. She married Harry Tollefson in Pequaming on September 27, 1930. He preceded her in death in 1990. Martha lived in Pequaming until 1943 then moved to Bayshore. She attended L'Anse Baptist Church. Martha was a homemaker and was devoted to her family. She had a remarkable music talent that was demonstrated by her beautiful singing voice. Mrs. Tollefson is survived by her loving children, Harlan (Shirley) Tollefson of L'Anse, Garry (Helen) Tollefson of L'Anse, Kathleen "Dee Dee" (Robert) Hilker of Owatonna, MN., Patricia Halverson of Minneapolis, MN., and Sandra Tollefson of Owatonna, MN., 20 grandchildren, 46 great grandchildren and numerous nieces and nephews. She was preceded in death by 2 sisters, Evelyn Allert and Theresa Whaley, and brother, Carl Thoresen. Funeral services for Mrs. Tollefson were held at 3 p.m. on Monday, April 24, 2006 at the L'Anse Baptist Church with Pastor Jerry Bishop officiating. Interment took place in the Evergreen Cemetery. The family received friends on Sunday, April 23, 2006 from 5 until 8 p.m. at the Reid Funeral Service and Chapel, L'Anse and for 1 hour prior to the service at the church on Monday. The family has entrusted the Reid Funeral Service and Chapel, L'Anse with arrangements. Mrs. Tollefson's obituary may also be viewed and condolences sent to the family at www.rfsc.net

The family of MARTHA E. TOLLEFSON created this Life Tributes page to make it easy to share your memories.