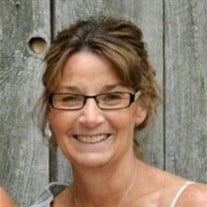 Michele F. ”Mickey” Martinac, age 54, of 175 Cooper Lake Rd., Ishpeming passed away on Saturday, December 7, 2019 at UP Health System Marquette while in the loving care of her family. Michele had fought a courageous 4 yearlong battle with multiple myeloma. Michele was born in L'Anse, MI on December 10, 1964 daughter of Patricia Ann (Carkeek) and the late Curtis Francis Funke. She attended the Sacred Heart Catholic School in L'Anse from 1st till 6th grade. Michele was a graduate of the L'Anse High School, Class of 83. She married her high school sweetheart Steven P. Martinac on June 1, 1984 in L’Anse, MI. Michele and Steve had lived in White Pine and Ontonagon for a brief period where Michele had worked at Tiny People Nursery School. She and Steve then moved to Ishpeming in 1994 where Michele did home day care, along with working for several years as a price changer at Target in Marquette and was co-owner of Croatian Village II. Michele cherished time spent with her family, especially her grandkids. She could often have been found snowshoeing, spending time at camp on Second Sand Beach, out on the boat fishing, adventures on the side-by-side, going for rides in the woods, or simply paddling her kayak. She has also had her dog Kurski by her side. Michele was a very loving, caring and giving person who would do anything for anyone she could. She made many friends through her life. She was a hard worker and she lived for her family. Her husband, Steve was her best friend since the age of 15. They were truly high school sweethearts. Survivors include her husband of the past 35 years, Steven P. Martinac of Ishpeming, two sons - Ryan (Lindsay) Martinac of Ishpeming and Tyler (fiancée Katie Tonge) Martinac, of Aura; two daughters - Ashley (Kyle) Maki of Ishpeming and Lacey Pietro of Hobart, WI; her mother and father Patricia and Robert Kissel of Baraga; 4 grandchildren - Tyler, Brooklyn, Aria, Hayden; two sisters - Jean'marie (fiancé Gary Anderson) Funke of San Jose, CA and Kerri (Bill Sikkila) Kissel-Sikkila of L'Anse; two brothers - Kurt (fiancée Sarah Hoppe) Funke of Clinton, IA and Ted Kissel of Baraga; father-in-law Paul (Lillian) Martinac of Calumet; sister-in-law Bonnie (Kevin) Patana of L’Anse; nieces and nephews - Aaron, Estee, Cassandra, Nick, Shannon, Travis, Taylor, Taryn, Zach, Aleah, Bobbie, and Carter. Numerous aunts, uncles and cousins. Michele was preceded in death by her father Curtis Funke and her mother-in-law Sandra Sundman. The family will greet relatives and friends from 3 until 5 pm on Thursday, December 12, 2019 at Reid Funeral Service and Chapel, 18240 US 41, L’Anse, MI. Funeral services will follow the visitation at 5:00 pm on Thursday with Father Corey Litzner to officiate. A meal will follow the services in the Harrington Gathering Room at Reid Funeral Service and Chapel. Spring interment and graveside services were held at 1 p.m., Saturday, May 9, 2020 Evergreen Cemetery in L’Anse. Michele’s obituary may be viewed at reidfuneralservicechapel.com or bjorkandzhulkie.com where relatives and friends may leave a note of remembrance.

Michele F. &#8221;Mickey&#8221; Martinac, age 54, of 175 Cooper Lake Rd., Ishpeming passed away on Saturday, December 7, 2019 at UP Health System Marquette while in the loving care of her family. Michele had fought a courageous 4 yearlong battle... View Obituary & Service Information

The family of Michele F. "Mickey" Martinac created this Life Tributes page to make it easy to share your memories.

Send flowers to the Martinac family.