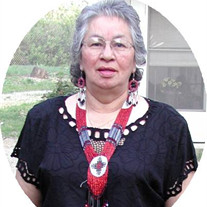 Edwards, Nancy Louise passed away in the company of her family on June 23, 2012. Nancy had been suffering with Alzheimer's for the past few years and now she has gone onto her eternal rest with peace. Nancy was born on March 22, 1942 to William Edward ‘Boyzie’ and Mary Evelyn ‘Meno’ (Cardinal) Jondreau in Assinins, Michigan. Nancy graduated from Baraga High School before moving to California through the BIA relocation program. She worked at Pacific Bell Telephone Company until her marriage to Rod David Edwards on August 10, 1962. In 1970, she and Rod started their own silk screen printing business, Aero Display in Glendale, CA. In 1978 they also started Canyon Outdoor, an outdoor advertising company, where she worked until Alzheimer's forced her retirement. Nancy graduated from College of the Canyon in 1980. She also worked in L’Anse in the early 1990’s as a supervisor for Bedabin Youth Home counseling many kids in need. In 1995 she made a run for KBIC Chief Tribal Judge and subsequently became active in a tribal political group, Fight for Justice. Nancy has been very active in political affairs all her life, especially those involving civil rights. From walking in protests against the Vietnam war to helping veterans, and for those who were disenfranchised. Nancy & Rod had an open door for friends and family to stay. Nancy had a very generous heart was always willing to lend a hand and support anyone who needed that extra assistance to get them back on their feet. She was the guardian of the underdog or anyone she felt did not have fair chance on their own. After the Vietnam War, they hosted a refugee, Soomula, for couple of years. And over the years there were several guests from around the world staying with them. Rod & Nancy raised 5 children. She was always involved in her children's activities; she was elected president of the PTA of Haskell Elementary School in Granada Hills, CA.; She was a coach for her son’s flag football teams, on her team were former Green Bay Packer Darryl Ingram and former Los Angeles Dodger Todd Zeile. Nancy has been involved in activities with the Catholic Church. She and a few others started the first Kateri Tekakwitha Circle in Los Angeles which led to the building of the Blessed Katari Catholic Church in Saugus, CA. She was a member of the Keweenaw Bay Indian Community. Nancy was a member of Our Lady Perpetual Help church in Newhall, Ca and the Most Holy Name of Jesus church in Assinins. In her heart she was always a girl from Beatown. She was proceeded in death by her husband, Rod David Edwards and her son, Rod Anthony Edwards, her Parents and her siblings; William Jondreau, Jerry Jondreau, Elaine Maki and Alice Hadden. Surviving is her brother, Robert (Jamie) Jondreau of Virginia, children; Rose Marie Edwards of Baraga, MI, Eddy Michael (Christine) Edwards of L'Anse, MI, Julie Michelle (Fred) Sanchez-Edwards of Canyon Country, CA, Mark Alan Edwards of Baraga, MI. Grandchildren: Ronald Thomas (Katie) Edwards of Baraga, MI, Harrison Tyler Edwards Kanak of Canyon Country, CA, Tonni Marie Edwards of Baraga, MI, Hainyaihduzazawinyan ‘ZaZa’ Edwards, Cheyenne Edwards, and Zhoomingweniapane ‘Zoomin’ Edwards of L'Anse MI. Great-grandchildren: Star Marie Edwards, Ziah Ray Edwards, Ryland Anthony Edwards, James Thomas Edwards, Emma Louise Edwards, Joshuah Marcus Collins Edwards; Many nieces, nephews, cousins, and friends. A Mass of Christian burial was celebrated at 11 a.m. on Wednesday, June 27, 2012 from Holy Name of Jesus Catholic Church, Assinins, MI with Father John Haskall, celebrant. Interment will take place in the Assinins Cemetery. The family greeted friends on Tuesday, June 26, 2012 from 6 until 8 p.m. at Mrs. Edwards’s residence at 15362 Mission Road, Baraga and on Wednesday for 1 hour prior to the Mass also at her residence.

Edwards, Nancy Louise passed away in the company of her family on June 23, 2012. Nancy had been suffering with Alzheimer's for the past few years and now she has gone onto her eternal rest with peace. Nancy was born on March 22, 1942 to William... View Obituary & Service Information

The family of NANCY L. EDWARDS created this Life Tributes page to make it easy to share your memories.

Edwards, Nancy Louise passed away in the company of her family...

Send flowers to the EDWARDS family.