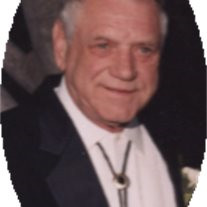 PAUL J. “CROW” SUPANICH, 77, of L’Anse, MI. passed away at his residence Saturday morning June 26, 2010, following a lengthy illness. He was born in L’Anse on May 16, 1933 the son of the late Frank and Helen (Morin) Supanich. Paul attended school in L’Anse. He served in the United States Army during the Korean Conflict. Paul married the former Martha “Mort” Huusko on February 26, 1962 in Libertyville, IL. He had worked locally at Celotex and Connor Lumber. Paul had also worked on the ore boats, as a roofer and had been employed as a millwright for various companies until his retirement. He was a member of the L’Anse VFW #3897, the L’Anse Eagles #2287, and the Michigan Carpenters Union. Paul enjoyed listening to and singing country music, playing guitar, polishing rocks, his pool and bowling leagues, picking blueberries, camping, fishing, hunting, and woods rides with his children and grandchildren. Mr. Supanich is survived by his loving wife of 48 years, Martha, sons Dan (Alison) Supanich of Washington, Mark Supanich of Montana, Faron Supanich of Lansing, and John (Norma) Supanich of Madison, WI, daughters Pam (Paul) Besonen of Trout Creek, Alice (Gary) Ehnert of Middleton, WI, and Nancy (Rob Hyatt) Supanich of Tarzana, CA, 12 grandchildren, and 1 great grandson, brothers, Frank (Marcy) Supanich, Ray Supanich, and Nick (Dee) Supanich all of L’Anse, Bob Supanich of Illinois, and Tony (Terry) Supanich of Oregon, WI, sisters, Marian Kruetzer of Illinois, and Ann Marie (Jim) Sullivan of Illinois. Numerous nieces, nephews and cousins also survive. He was preceded in death by his son William, infant brother, Martin, and sisters Alice, Rosemary, and Ruth. A memorial celebration of Mr. Supanich’s life was held at 12 noon on Friday, July 2, 2010 at the Reid Funeral Service and Chapel. The family greeted friends at the funeral chapel on Friday from 10 a.m. until the time of the celebration. Baraga county area veterans, under the direction of the Baraga American Legion Post 444 conducted military honors at the funeral chapel on Friday at 11:30 a.m. Following the celebration of his life, the family invited friends to join them for fellowship and a luncheon in the Harrington Gathering Room, located at the funeral chapel. Memorials in Mr. Supanich’s honor may be directed to the Baraga County Home Care and Hospice.

The family of PAUL J. SUPANICH created this Life Tributes page to make it easy to share your memories.

Send flowers to the SUPANICH family.