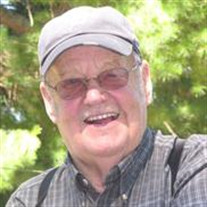 Paul Adams, 83, passed away peacefully on Saturday January 4, 2020 at Omega House in Houghton, Michigan from long-term heart disease and recently-diagnosed acute myelogenous leukemia. In the last week of his life he was surrounded by family and friends, many of which traveled long distances to be with him. Paul was born on July 8, 1936 in Hazel Park, Michigan to Lempi (Parkkila) Adams (later Kemppainen) and Clayton Adams. He graduated from Graveraet High School in 1954, and served in the U.S. Army from 1955 to 1957 and was stationed in Germany. He married Phyllis (Pulkki) Adams on August 2, 1958. His career was primarily in the trucking and ornamental iron industry. Paul was a lifetime member of the Finnish Association in Farmington Hills, Mission United Lutheran Church in Pelkie, Baraga American Legion Post 444, Otter Lake Sportsmans Club, Baraga Lions Club and a volunteer at the Hanka Homestead. Paul’s engaging personality made everyone who knew him feel welcome and loved. Paul especially liked to meet and make connections with people wherever he traveled. When he and Phyllis entered the room, the room was immediately full of friends. He was preceded in death by his wife of 53 years, Phyllis (Pulkki) Adams in 2011; father Clayton Adams in 1947; mother Lempi Parkkila Adams Kemppainen in 1979; stepfather Lauri Kemppainen in 1979; brother Clayton Adams (Donna) in 2015; brother John Adams (Lorraine) in 2018; and sister Nancy Adams Neuman Palmer (Ron) in 2005. He is survived by son, Mike Adams (Gail) of Baraga; daughter Tammy Damrath (Will) of Englewood, Colorado; grandson Tyler Adams (Emily) of Novi, Michigan; grandsons Luke and Clayton Damrath of Englewood, Colorado; sister-in-law Kathryn (Pulkki) Kokkila of Hancock; special friend Janet Penhale of Negaunee; and many nieces and nephews. Graveside services and military honors for Paul will be held at 11 am on Saturday, June 6, 2020 in the Pelkie Cemetery, Pelkie, Michigan. Immediately following the graveside service, the family invites friends to join them for fellowship and an outdoor picnic luncheon at Mission United Lutheran Church, Pelkie, MI. Paul’s obituary may also be viewed and condolences sent to the family at www.reidfuneralservicechapel.com The Reid Funeral Service and Chapel, L’Anse has been entrusted with the funeral arrangements.

Paul Adams, 83, passed away peacefully on Saturday January 4, 2020 at Omega House in Houghton, Michigan from long-term heart disease and recently-diagnosed acute myelogenous leukemia. In the last week of his life he was surrounded by family... View Obituary & Service Information

The family of Paul F. Adams created this Life Tributes page to make it easy to share your memories.

Send flowers to the Adams family.