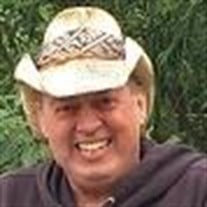 On the morning of October 10th Paul R. DesRochers, Jr. passed away peacefully surrounded by his loved ones after fighting a long battle with cancer. Paul was born August 31st, 1965 to Paul DesRochers Sr. and Carlota (Denomie) Beauprey. During his youth he enjoyed the outdoors hunting, trapping, and fishing. Paul also played hockey on local teams for several years. After high school Paul was a “jack of all trades” working in the family logging business, bartending, and roofing, just to name a few. Paul was then employed by the KBIC Maintenance Department. He also owned his own logging business at that time. Paul’s calling came in 2000 when he was hired as a Service Technician with Terex which located him to Denver, Colorado for over 5 years. Paul got to see much of the country while working for Terex and he also took up the game of golf. Upon discovering his illness, Paul returned to the Baraga area to be near family and friends. Over the next few years Paul owned his own logging truck working in the local area. He then left the area again briefly to drive truck in Green Bay and Las Vegas. After that he moved to Appleton, Wisconsin to spend time with his daughter and sister. In the past year he returned home to the Baraga area and lived with his significant other Amy and his furry friend Bella. Paul made many friends in all of his travels and will be sadly missed by all. He is survived by his children Jessi and Nathan, his siblings Joan DesRochers, Stacey (Dan) Koski, Matthew (Shannon) DesRochers, niece Aleah Kissel and nephews Kyle, Alan, David, and Ryan DesRochers. He was preceded in death by his parents Carlota and Paul Sr. A celebration of Paul's life will be held on Thursday, October 18, 2018 from 12:00 p.m until 2 p.m. in the Ceremonial Room located at the Ojibwa Senior Center, Baraga, MI. Immediately following the celebration of life, the family invites friends to join them for fellowship and a luncheon at the Ojibwa Senior Center. The Reid Funeral Service and Chapel, L'Anse has been entrusted with the funeral arrangements. “Chief”, “Boss”, “Buttercup”, “Cupcake”--just some of the phrases we would hear, knowing it would follow with a cowboy hat, a big smile and enjoyable conversations. Throughout everything he has always remained optimistic and looked at the positives in life. When he would start a story, it would typically go, “Kiddo, I’m telling you these things so you know what not to do”. I would always know there was going to be a crazy story to follow. He lived his life. Traveling all over the United States, and even making it to Italy. Branching out with Terex and working in a career that he was passionate about. Experiencing all life could be and always looking at the silver lining. He showed me many times that the obstacles in life aren’t meant to stop you, they are meant to push you harder. Diagnosed with Multiple Myeloma in 2006, never stopped his shine. He went into remission and stayed healthy for a solid 8 years. In 2014 it came back and he achieved partial remission. The time in between my dad and I camped Northern Wisconsin for 2 months, moved to Las Vegas and went on any adventure we could think of. Experienced life and shared stories. In 2017 the cancer was aggressive. No matter what he fought hard and kept his head held high. At Mayo Clinic he was the “guy in the cowboy hat”. Known for his positivity and always having a story that would bring everyone else out of their funk. Smiles and laughter are what kept my dad going. He taught me through his actions and words that no matter what life throws at you, there is always a bright side. I will forever remember his smile and think of the millions of stories he’s told me over the years. He was a great guy that was loved by most and missed by all.

On the morning of October 10th Paul R. DesRochers, Jr. passed away peacefully surrounded by his loved ones after fighting a long battle with cancer. Paul was born August 31st, 1965 to Paul DesRochers Sr. and Carlota (Denomie) Beauprey. During... View Obituary & Service Information

The family of Paul R DesRochers Jr created this Life Tributes page to make it easy to share your memories.

Send flowers to the DesRochers family.